Satmar Rebbe: Hands Stained With Blood Of Terror Victims Of Those Voting For Haredi Parties 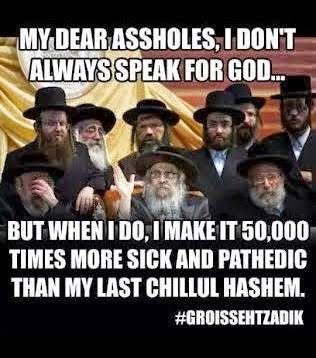 Satmar Rebbe: Hands Stained With Blood Of Terror Victims Of Those Voting For Haredi Parties

During a speech to his followers at an annual gathering of psychos: bufoon pictured above said:
“Since early elections were announced, the Haredi parties have already started preparing with great joy to join the next government, with sweet dreams about what they will achieve by being part of the government,” the Rebbe said with angst. “This will turn them into partners for the implementation of the core studies by the secular education system, and this will turn them into partners of drafting Torah students into the ‘impure’ military.”

The Rebbe went on the lambast the ‘Misnachlim’ (settlers), who enter the Temple Mount and continue building activity in settlements on Arab land and between the Arabs, thus igniting a fire and inspiring the “cruel murderers to kill and murder Jews, like the ones we recently saw in Jerusalem.”
“Jewish blood is flowing like water,” the Rebbe roared, “and Frum Misnachlim are unfortunately responsible for that.”
“We must speak out and declare: your hands are stained with Jewish blood,” the Rebbe continued. “It hurts to say, but whoever intends to participate in the elections and votes – even for an Ultra-Orthodox party – who will ultimately join a government that will instate the settlements – has a hand in anything that could possibly happen in the future, Hashem Yerachiem… And we have to cry out loud: today’s leaders, the Misnachlim and those who support them, are liable for all the tzures and murders.”
“We ask the leaders of the religious parties, how can you be partners with those who are abandoning Jewish lives, not only in ‘Eretz Yisroel’ but also worldwide?” the Rebbe asked.
“They will be responsible for this ‘Shefichas Dumim’ (spilled blood) to the full extent,” he declared.
http://jpupdates.com/2014/12/14/satmar-rebbe-hands-stained-blood-terror-victims-voting-haredi-parties/
Posted by Paul Mendlowitz at Tuesday, December 16, 2014