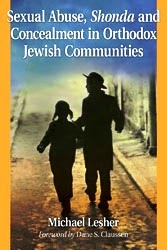 In Hebrew Scripture, prophets often resist the divine call. Their prophetic job description is superhuman. They will be scorned and their message fiercely denounced by the very people they must reach. Indeed, prophets take upon themselves the full weight of shame and scandal they protest.

The Yiddish word shonda has this double meaning of a “shameful act” and the “public exposure of scandalous information,” as attorney Michael Lesher sets forth in his book, “Sexual Abuse, Shonda and Concealment in Orthodox Jewish Communities.”

Lesher has met adamant resistance to his work because of the unwelcome exposure it brings to his own people and to those rabbis who want their unquestioned power to dominate even secular government. But he accepts the prophetic mantle and insists “there can be no legitimate role for a rabbinic court in any sex abuse investigation.”

He argues passionately for the powerless, such as an Orthodox infant who died at three months in Israel because his young father took offense at a defect in the baby’s neck muscles. He bit, punched and threw his imperfect son against a wall. The father showed no remorse, rabbis declared him innocent, religious people paid for his defense, and ultra-Orthodox mobs rioted against the “bigotry” of civic authorities that deigned to judge one of their members.

In such a world, Lesher asks, what hope is there for children raped by Orthodox rabbis and teachers? With prosecutorial precision, he cites well-documented cases that expose the self-righteous façade of Jewish Orthodoxy from Jerusalem to New Jersey.

Lesher recognizes that civil authorities fear being charged with anti-Semitism, and the secular press tiptoes around the issue. He shows how an Orthodox-run nonprofit agency, working with Brooklyn’s politically motivated district attorney, systematically betrayed sex-abuse victims while sheltering their assailants.

Lesher writes that religious street patrols serve as enforcers: “Orthodox rabbis prefer their communities to be governed by a police force answerable to rabbinic rather than municipal authority.”

Anyone familiar with child sex-abuse cases will recognize the knee-jerk defense strategy of blaming “scorned wives and dysfunctional children.”

Lesher shows the added dimension of religious mind-control so absolute that “no Jew raised in the rabbinic tradition” would consider “acting as an individual in any matter whatsoever.”

Under Orthodox law, if a Jew threatens to inform on another Jew to gentile authorities, the whole community must use force, even deadly force, to prevent that betrayal.

Lesher notes that youth have been empowered by the Internet and are daring to protest sex abuse on blogs such as “TheUnorthodoxJew.Blogspot.com” He dedicates his compelling plea to his own children with a blessing: “May you contribute to a wiser and better world.”

THE AWESOME REVIEWS ARE POURING IN:

Unorthodox-Jew A Critical View of Orthodox Judaism: "Sexual Abuse, Shonda and Concealment in Orthodox Jewish Communities is a call to all charged with protecting children from abuse to refuse to appease powerful rabbis who try to prevent child sexual abuse cases from being reported and investigated."

Anne Grant (ParentingProject@verizon.net), a retired pastor, was executive director of the Women’s Center of Rhode Island and writes about public policies that harm victims of abuse.
Posted by Paul Mendlowitz at Friday, September 12, 2014