What Agudath Israel & All Jews Can Learn From The "Goyim"! THOUSANDS OF PEOPLE KISSED THEIR RELIGION GOODBYE! Deal With This At Your "Feel-Good" about Nothing Convention - Where Lies & BS Prevail!

The Catholic Church’s Sins Are Ours

It’s fashionable among some conservatives to rail that there’s insufficient respect for religion in America and that religious people are marginalized, even vilified.

That’s bunk. In more places and instances than not, they get special accommodation and the benefit of the doubt. Because they talk of God, they’re assumed to be good. There’s a reluctance to besmirch them, an unwillingness to cross them.


The new movie “Spotlight,” based on real events, illuminates this brilliantly.

“Spotlight” — which opens in New York, Los Angeles and Boston on Friday and nationwide later this month — chronicles the painstaking manner in which editors and writers at The Boston Globe documented a pattern of child sexual abuse by Roman Catholic priests and the concealment of these crimes by Catholic leaders.

Because of the movie’s focus on the digging and dot-connecting that go into investigative reporting, it has invited comparisons to “All the President’s Men.”

But it isn’t about journalism. Or, for that matter, Catholicism.

It takes place in 2001 and 2002, and that time frame itself is a remarkable reflection of how steadfastly most Americans resist any intrusion into religious groups, any indictment of religious officials.

Eight years earlier, James Porter was convicted of sexually abusing 28 children in the 1960s, when he was in the Catholic priesthood. He was believed to have abused about 100 boys and girls in all, most of them in Massachusetts.

Major newspapers and television networks covered the Porter story, noting a growing number of cases of abuse by priests. Porter’s sentencing in December 1993 was preceded by two books that traced the staggering dimensions of such behavior. The first was “Lead Us Not Into Temptation,” by Jason Berry.

The second was “A Gospel of Shame,” with which I’m even more familiar. I’m one of its two authors.
But despite all of that attention, Americans kept being shocked whenever a fresh tally of abusive priests was done or new predators were exposed. They clung to disbelief.

“Spotlight” is admirably blunt on this point, suggesting that the Globe staff — which, in the end, did the definitive reporting on church leaders’ complicity in the abuse — long ignored an epidemic right before their eyes.

For some of the same reasons that others did. Many journalists, parents, police officers and lawyers didn’t want to think ill of men of the cloth, or they weren’t eager to get on the bad side of the church, with its fearsome authority and supposed pipeline to God. (After the coverage of the Porter case, Cardinal Bernard Law of Boston announced, “We call down God’s power on the media, particularly the Globe.”)
“Spotlight” lays out the many ways in which deference to religion protected abusers and their abettors. At one point in the movie, a man who was molested as a boy tells a Globe reporter about a visit his mother got from the bishop, who was asking her not to press charges.

When the cookies finally went away, many Catholic leaders insisted that the church was being persecuted, and the crimes of priests exaggerated, by spiteful secularists.

But if anything, the church had been coddled, benefiting from the American way of giving religion a free pass and excusing religious institutions not just from taxes but from rules that apply to other organizations.

A 2006 series in The Times, “In God’s Name,” noted that since 1989, “more than 200 special arrangements, protections or exemptions for religious groups or their adherents were tucked into congressional legislation, covering topics ranging from pensions to immigration to land use.” That was before the Supreme Court, in its Hobby Lobby decision, allowed some employers to claim religion as grounds to disobey certain heath insurance mandates.

A story in The Times this week described how various religions are permitted to use internal arbitration procedures to settle disputes that belong in civil court. It cited a federal judge’s ruling that a former Scientologist had to take his claim that Scientology had defrauded him of tens of thousands of dollars before a panel of current Scientologists.

To cloak sexual abuse and shield abusive priests, Catholic leaders and their lawyers routinely leaned on the church’s privileged status, invoking freedom of religion, the separation of church and state, and the secrecy of the confessional. They thus delayed a reckoning.

JACOB PERLOW/ SAMUEL KAMINETZKY - WHAT WOULD YOUR MOTHERS SAY!? 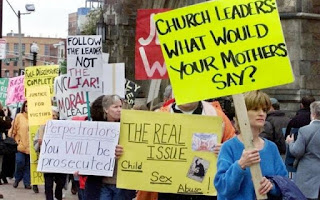