The Thieves & Frauds Never Ending Quest For Idiots and Fools (and finding them everywhere)!!! 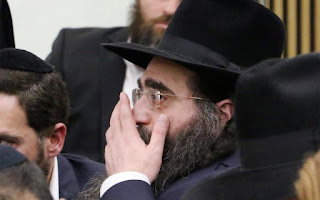 The World’s Leading Kabbalist, Guru to Billionaires, Is Going to Jail

Rabbi Yoshiyahu Yosef Pinto was once the powerful head of a multimillion-dollar empire and spiritual adviser to the likes of LeBron James. Now he’s going to prison for bribery.

Rabbi Yoshiyahu Yosef Pinto is a celebrity in Israel and among financial and real estate elites in New York. A sage whose followers include the leaders of Israel’s business elite, Pinto is the descendant of Moroccan Jewish saints, a Sephardic hero, and a master of Kabbalah, the ancient tradition of Jewish mysticism and magic. His net worth has been estimated at $19 million, not including the vast sums under the control of his various nonprofit organizations.

He is also a felon, convicted of bribing an Israeli police general. This week, after exhausting what is probably his last appeal—a last-ditch effort to avoid jail for health reasons—it appears he is finally headed for prison.

Adding insult to injury, a $30 million defamation suit the rabbi’s organization filed against a reporter was dismissed by a New York court this week for lack of jurisdiction.

How does a Kabbalist, who by all accounts is indeed a devout man who practices what he preaches, become a multimillionaire?

It’s the network. In New York, Pinto’s close followers include leading Jewish real estate magnates like Ofer Yardeni and Charlie Kushner, politicians like Anthony Weiner and Eric Cantor, Jewish leaders including celebrity rabbi Marc Schneier and Malcolm Hoenlein (the head of the Conference of Presidents of American Jewish Organizations), and even LeBron James.

Followers believe that Pinto has supernormal powers. Many said he can read minds. Others say he has the ability to bless everything from business ventures to political careers—and to curse enemies as well. Like other Kabbalists, Pinto speaks only Hebrew, is soft spoken, and keeps his eyes partly closed, the better to detach from worldly concerns. He dispenses advice, blessings, and amulets. He is the descendant both of the famous Moroccan mystic Rabbi Yisrael Abuhatzeira, also known as the Baba Sali, and of Rabbi Haim Pinto, one of Morocco’s most powerful rabbis. And he welcomes everyone: religious, secular, Jewish, non-Jewish.

But for a holy man, Pinto is surrounded by shady criminal elements, including outright crooks. In Israel, these include Yossi Harari, the head of the Ramat Amidar underworld gang, and mobster Shalom Domrani.