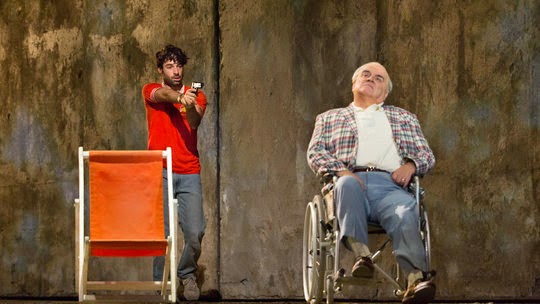 Don't American Jews Realize They Are All Klinghoffer?

They just don't get it.

An elderly, crippled, wheel chair bound Jew by the name of Klinghoffer was thrown overboard from a cruise ship by Arab terrorists about a decade ago. Klinghoffer’s only crime was that he was Jewish. These facts are uncontested and well-documented.

Nevertheless, in the name of artistic freedom, a play was written that justified the murderous deed and intimated that Klinghoffer’s murder was really the fault of the Jewish state of Israel. Again in the name of artistic freedom, an operawas written reiterating that theme and the opera was produced and presented by the Metropolitan Opera Company of New York last week.

It seems that all of the musical critics are in agreement that it was not a great opera, artistically speaking. However, in today's completely politicized and overwhelmingly anti-Israel and anti-Jewish intellectual world, the Metropolitan Opera Company of New York felt impelled to produce this second-rate work in order to make a statement regarding its own political agenda and skewed worldview.

There was a protest mounted against the showing of this opera by some Jewish organizations in New York. However, the Metropolitan Opera Company, using the shield of artistic freedom uber alles – just as the Jew haters on university campuses use the shield of academic freedom to dispense their poison – naturally defended its production and in fact was proud that it engaged in such a groundbreaking venture.

The New York Times, one of the leaders of the consistently shrill anti-Israel chorus, in its column regarding the production of this opera interviewed a few Jewish opera goers who were present at the Klinghoffer opera. These Jews were naturally not disturbed by the nature or message of the production and seem to be somewhat bewildered as to what all of the controversy was about. They unfortunately represent a large section of the American Jewish community that is completely asleep as its society hurtles towards the brink of societal weakness, loss of influence, if not even self extinction. They just don't understand that they are Klinghoffer. And that therefore they are applauding their own eventual demise.

Hitler arrived on the scene three generations too soon. In today's climate there would have been many who would have “understood” him and his motives.

production, which makes the murderers heroic and the victim pathetic. This opera is perfectly acceptable in today’s American society because poor Mr. Klinghoffer was Jewish. These donors also don’t realize thatthey are also Klinghoffer.

Had Klinghoffer been Moslem or black, his murder would have been judged to be a racist and terrorist crime, worthy of punishment, universal criticism and certainly no opera would have been produced to “explain” the “justified motives” of the murderers. Hitler arrived on the scene three generations too soon. In today's climate there would have been many who would have “understood” him and his motives. In spite of the disaster of the “appeasement” policy of the 1930’s this policy is being followed today in negotiations with murderers that will only lead to a dead end and I do mean dead. Except that in today's world this is called “engagement.” It is a prime example of whistling past the graveyard, which always eventually leads to being in the graveyard.

It is therefore no surprise that the Associated Press in reporting the terrorist incident last week in Jerusalem when a three-month-old infant was murdered by an Arab terrorist driving his automobile into a crowd of innocent people waiting for a train or bus and was then subsequently shot dead, headlined the incident as follows: “Israeli Police Shoot Man in Jerusalem.”

This time there was a sufficient outcry of Jewish outrage that the headline was removed a few hours later and replaced with a more accurate description of the terrible event that had occurred. Jews and Israel are fair game for every sort of distortion, criticism and slight, diplomatic, governmental or media generated.

The Jewish world somehow still believes that it exists in the more tolerant and subdued immediate post-Holocaust world of the 1950s when “Hava Nagilah” was the most popular song on American radio and stage. Those days are long gone and have been replaced by hatred, discrimination and demonization of all things Jewish.

Hillel said that “If I am not for me, then who will be for me?” If individual Jews and communal Jewish organizations are not now prepared to vigorously counteract what is happening in the Western world and the United States vis a vis Jews and the Jewish state then we are truly staring into the abyss. We should remember and assimilate into our inner being that we are all Klinghoffer.