With So Many People Looking to Shut Up Rabbi Pruzansky, He Must Be Doing Something Right 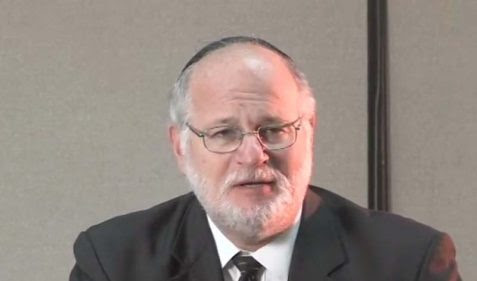 Rabbi Steven Pruzansky, who has served since 1994 as the spiritual leader of Teaneck NJ’s Congregation Bnai Yeshurun (which boasts close to 600 families) appears to be making waves in faraway Israel, in the city of Modi’in. Modi’in resident Josie Glausiusz on Wednesday sent a letter to the leaders of the city’s Hameginim synagogue, urging them to cancel a Monday, Feb. 13 event with Pruzansky, as reported Wednesday by Judy Maltz in Ha’aretz.

Maltz lifted from Wikipedia some of the “Controversies” section in Rabbi Pruzansky’s page, so we went to the same source and lifted all of them. Because a well-rounded education is the foundation of true liberalism:

1. In 1995, Abraham Foxman, then national director of the Anti-Defamation League, left Pruzansky’s congregation in protest of the rabbi’s calling then Prime Minister Yitzhak Rabin the “Rabin Judenrat.” Mind you, at the time, this “vitriol,” as Foxman called it, was mild stuff compared with other voices condemning Rabin’s selling out half of the land of Israel to Arab terrorists.

3. In November 2014 Pruzansky compared The New York Jewish Week to Der Stürmer. The JW for their part titled their editorial attacking Pruzansky, “A Rabbi’s Low Blow.” It was over a blog post titled “Dealing with Savages,” where Pruzansky proposed using live ammunition on Arab stone-throwers and suggests that any village that is home to more than two terrorists should be razed and its inhabitants deported. Foxman and the rest of the usual suspects accused Pruzansky of racism and of being anti-Arab. Two years and a few months later, some of the good rabbi’s blog post’s recommendations have been adopted as policy by the Netanyahu government.

Incidentally, following that post that urged a radical response to Arab daily violence against Jews, Pruzansky’s synagogue announced in a letter to the congregation that Pruzansky agreed to have his future blogs reviewed by editors and that the board would periodically review the process. Pruzansky himself was forced to express to the congregation his regret for having written in a way that “many have deemed harsh.”

4. On March 31, 2016, Pruzansky published a blog post titled “A Novel Idea,” blaming the promiscuous culture for many rapes reported on US campuses, and proposing marriage as a solution to the overall problem. Pruzansky was accused of blaming the victims of rape, of not taking rape seriously, and of not acknowledging or understanding marital rape exists (On campus?).

5. Pruzansky continues to serve as the Orthodox lightening rod for the Jewish left. Following an April 13, 2016, blog post in which he reiterated his arguments and position, the Jewish Orthodox Feminist Alliance (JOFA) demanded that Pruzansky be removed from the speaking roster of a conference at Bnai Yeshurun synagogue in Manhattan. Pruzansky was removed as speaker. In April 2016, the Rabbinical Council of America wrote that “while Rabbi Pruzansky raises some important points regarding sexual behavior on college campuses, the RCA rejects the tone and much of the substance of his recent comments regarding rape.”

Incidentally, while by Rabbi Pruzansky’s current account his synagogue has close to 600 member families, earlier accounts suggest there used to by as many as 800, which could mean the vociferous rabbi was doing damage to the synagogue’s bottom line.

Author Josie Glausiusz (The American Scholar) is spearheading the effort to block Rabbi Pruzansky’s appearance in Modi’in next month. Glausiusz is a fervent leftwing feminist (we visited her Twitter account), often in the most predictable fashion. Her email to the Hameginim synagogue read, “Rabbi Pruzansky’s views are deeply insulting to women, to Arab citizens of Israel, to Holocaust survivors, and to the family of Yitzhak Rabin and all those who mourned his murder.”

In other words, she, too, has hit the good rabbi’s Wikipedia page…

Glausiusz continued, “He should not be offered a public platform in Modi’in to air his offensive views. I call upon you to rescind your invitation to Rabbi Pruzansky to speak at your synagogue.”

The event, incidentally, will be an interview of Rabbi Pruzansky by Hameginim’s congregational rabbi, Adi Sultanik. Glausiusz, who could have opted to come to the event and ask embarrassing questions during the Q&A, opted instead to agitate for killing the show. Glausiusz told Ha’aretz: “I’m so fed up with people like this being given a public platform. As a woman and an Israeli citizen, I feel it is important to speak out against someone with such offensive views.”

No, that’s not what she’s been doing. Speaking against Pruzansky, demonstrating, demanding equal time – those would have all been legitimate responses. Instead, passing on debate and discussion, Glausiusz is advocating a boycott.

Whether or not she succeeds doesn’t really matter.

About the Author: JNi.Media provides editors and publishers with high quality Jewish-focused content for their publications.
Posted by Paul Mendlowitz at Friday, January 27, 2017 10 comments: