"The whole idea that anti-vaccination gangsters are abusing religious exemptions to put their children at harm is repugnant to me on so many levels...." 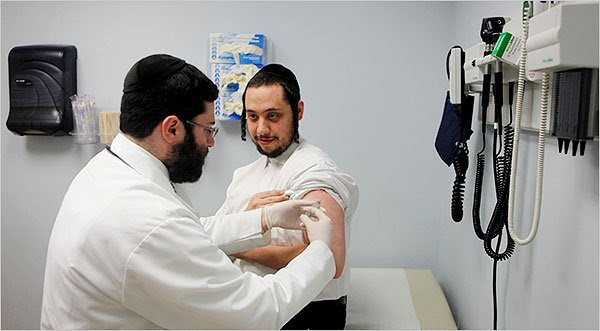 A review of religion and vaccinations


The father is a Roman Catholic, and as far as I could find, the Catholic Church strongly supports vaccination, even making it a moral and ethical issue by clearly stating that “there would seem to be no proper grounds for refusing immunization against dangerous contagious diseases…” In other words, not only is the Catholic Church not opposed to vaccination, it seems to indicate that it would immoral to not vaccinate.

This all lead me to wonder if there was research into the relationship between religion and vaccinations. And I found some.

Peer reviewed research into vaccines and religion.
In a comment on Facebook to my blog post, someone pointed me to a fascinating systematic review of the dogma of several religions with respect to vaccines and specific components of vaccines. The article was published in the highly respected and peer-reviewed medical journal, Vaccine, one of the top venues for vaccine research.

This peer reviewed piece was penned by John D Grabenstein, a religious expert on vaccines who happens to be employed by Merck, a major manufacturer of vaccines. I don’t usually point out these potential conflicts of interest, because I firmly reject the Big Pharma Shill Gambit, which is a form of poisoning the well, that is discrediting someone by making a nefarious link between a researcher and a pharmaceutical company.

Moreover, Grabenstein’s article is a review about religious beliefs, peer reviewed by others, and not making some claims that vaccines stop cancer. Of course, Gardasil, made by Merck, does stop cancer, but that has nothing to do with Grabenstein or this article.*

Since the article sits behind a pay-wall (complaint #47 about these scientific article pay-walls–how are we to intelligently discuss real science, if the articles cost us $25 or more to access–it has been posted publicly, but I’m sure Vaccine will get a take-down order eventually). Well, I got access to the article, so I thought I would summarize the study’s information about religion and vaccination. If you run across someone claiming that their religion is against vaccinations, you can check here, although, admittedly, the article only covers mainstream religions.

What do different religions specifically state about vaccines?
This covers almost all of the mainstream religions. And aside from the Dutch Reformed Church, there does not appear to be a formal antivaccine doctrine in any of the major religions around the world. When someone makes a claim that their religion is opposed to vaccines, I become suspicious that it is just a smokescreen for a personal refusal of vaccinations, irrespective of actual religious doctrine.


Generalizations about religions and vaccines.
Grabenstein’s meta-review of religious beliefs about vaccines uncover a major problem in the whole “religious exemption” to vaccines scam. If you cherry-picked information about any religion, you could probably make a convincing argument that the religion is opposed to vaccinations.

One ultra-orthodox sect of Judaism is very opposed to vaccines, but it is so far out of the mainstream Judaism, that I sincerely doubt any children in the sect would be going to a regular public school. What if a parent makes a claim that they are Jewish, and one rabbi says that vaccines are bad? Are we expecting a school administrator to ascertain the validity of their religion, or whether they actually adhere to that ultra-orthodox sect? Or to spend time investigating whether a parent is representing a “real” religion (in my world view, all religions are equally bogus) or some made-up version of some unknown religion?

One could argue that we don’t let a school administrator make that decision, and that they should just accept the claims of the parent. But that breaks down the system of protecting children through vaccination.

If I were making the decision, all exemptions, personal or religious, would be immediately placed in abeyance or completely ended. Either vaccinate your children (unless there is a very strong case of the necessity of a medical exemption) or find a private school that doesn’t demand vaccinations (if you can find one). Or another choice is to home school your child, but if he wants to go to college or to join a profession in healthcare, most colleges and training programs absolutely require vaccinations. Try becoming a physician without every vaccination–you can’t even enter medical school without meeting the “mandatory vaccination” standard. And there are rarely, if ever, exemptions.

The whole idea that anti-vaccination gangsters are abusing religious exemptions to put their children at harm is repugnant to me on so many levels. Including the fact that religion shouldn’t be a factor in any decision about public schools.

* If you’re going to make some nonsense personal attack on Grabenstein’s character in the comments here based on his employment at Merck, it better be supported by legal documents or some other evidence, or I will mock you mercilessly. And I will enjoy every minute of the mockery.

Editor’s note: This article was originally published in January 2014. It has been completely revised and updated to include more comprehensive information, to improve readability and to add current research.