"We have no right to regard ourselves as a religious community if we do not establish a mechanism for dealing with abuse within the rabbinate"....

We need a proper, transparent way of holding our mediocre (& WORSE) rabbis to account! 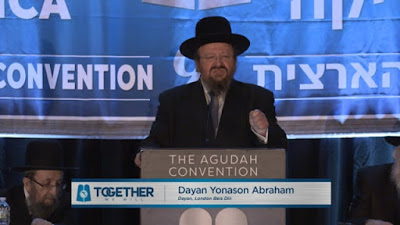 
Here we go again: another rabbinic departure to sweep under the extraordinarily capacious carpet of Anglo Jewry.

Dayan Yonason Abraham abruptly left Toras Chaim Synagogue in Hendon because, in his words, he had "fallen short of the standards expected of him", but no further information has been forthcoming.

The impression seems to be that, whatever we do, this must be hushed up as quickly as possible and, in particular, let's hope it doesn't get into the national press, because the Eleventh Commandment of Anglo Jewry over the decades has been “thou shalt not wash dirty linen in public”.

The problem is that, as we have seen time and again, private laundries don't wash.

No one has confirmed what Dayan Abraham may have done to warrant his departure. It is true that instances of misbehaviour by the Anglo-Jewish rabbinate are relatively rare, although less rare than one would hope given the nature of the vocation. But looked at in the round, the rabbinic cadre is for the most part mediocre at best and significantly under-performing at worst.

While there are a number of community rabbis who are extraordinarily inspiring in their dedication to their community and tireless in its service, they are the exception rather than the rule.

The perception held by some that the quality of the communal rabbinate is in general superb rests largely on the low standards expected of them, and the lack of transparency and accountability around their role that encourages a culture of flourishing mediocrity.

Sometimes when I am being told how wonderful a communal rabbi is because he visited somebody in hospital or gave thorough attention to a family wedding or funeral, I point out that this is precisely what they have been paid for: and with many rabbis on remuneration packages amounting to actual or full-time equivalent salaries that many of their communities can only dream of, when one calculates an hourly rate for their performance, the heroism of spending several hours a day visiting their parishioners in hospital suddenly appears in context to be nothing more than simply performing their job in the way that the rest of us have to do without the compensation of uncritical adulation.

In part, this is because the expectations of communities have become matched to their experiences over time. And perhaps because it is “public money”, synagogue boards are less rigorous in determining what value for money they are getting day by day from their rabbi than they would be in other professional circumstances.

But the main reason why rabbis can perform poorly and get away with is because there simply are no properly regulated standards for the rabbinic profession.

While contracts have become more detailed and, to some extent, restrictive than they used to be, there is no systematic method of regulation or enforcement to support the greater detail on those contracts.

If I am unimpressed or offended by the performance of my doctor, my lawyer, my dentist or any other trained professional, there is a clear method by which I can complain. And that applies to simple under-performance as much as to rarer cases of misconduct or impropriety.

There is no professional body that regulates the rabbis in a transparent and accountable way and investigates complaints. In extreme cases I can of course complain to the Chief Rabbi – whose dedication and commitment to the community and to the quality of the rabbinate is well-known – but there is no mechanism for him to make a transparent and accountable investigation and produce publicly identifiable results.

This is simply unacceptable in today's world.

Even judges are now subject to an unaccountable and public investigatory mechanism for misconduct or significant under-performance (such as unreasonable delay in producing written judgments) and the Judicial Conduct Investigations Office, far from diminishing the reputation of the judges, ensures that they can be seen to earn the respect that the system requires them to be accorded.

Exactly the same is true of the rabbis; and in order to preserve the reputation of hard-working, honest and decent rabbis, it is now overdue that we have a proper mechanism for dealing with those who underperform or misbehave.

Over the last few years a number of UK rabbis have behaved improperly and in some cases have left behind victims suffering from their behaviour in a number of different ways. The reaction of the community has been to enjoy a passing scandal, but beyond that the establishment has raced to cover up the wider picture and the mechanisms of reputational damage-limitation have taken precedence over thoughts about support and care for victims and imposing enforceable standards.

We have no right to regard ourselves as a religious community if we do not establish a mechanism for dealing with abuse within the rabbinate, and accountable and transparent ways for people to address inadequate performance, so that we can go back to respecting the rabbis as a group knowing that those who deserve respect will receive it and those who don’t will be dealt with appropriately.

Daniel Greenberg is a lawyer specialising in legislation and the legislative process. He has 30 years experience in the private and public sectors dealing with legislation. He was a Parliamentary Counsel for 20 years; he is now an officer in the House of Commons, and a writer, trainer and adviser.