Tragedy Then Triumph - Editorials - MORE ON THE ISAAC HERSH TRAGEDY!

We Are No Better Than The Gentiles! Maybe Worse - 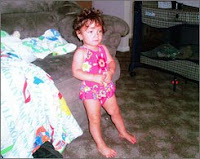 The girl's mother, Neida E. Baez, 19, called for an ambulance Sunday saying her boyfriend, Harve L. Johnson, had brought the unconscious child to her, limp and wet from an attempt to revive her in a bathtub, a police affidavit said.

Johnson acknowledged beating the girl with a video game controller but did not say why, police said. Baez said Johnson had abused the girl in the past and said she heard the girl scream after Johnson beat her Sunday, according to the affidavit. Johnson, 26, was charged with aggravated assault, reckless endangerment and other counts. Baez was charged with endangering the welfare of a child. Detective Dana Ward said Baez was charged because she did not intervene or try to get help for Darisabel.

Camacho said that because of the girl's death new charges would be filed. Johnson and Baez remained in custody Tuesday. His bail was set at $200,000; hers was $25,000. Through police, family members declined requests for interviews Tuesday. Court officials said they did not know whether Johnson and Baez had lawyers to speak for them.
Posted by Paul Mendlowitz at Sunday, April 06, 2008 4 comments: