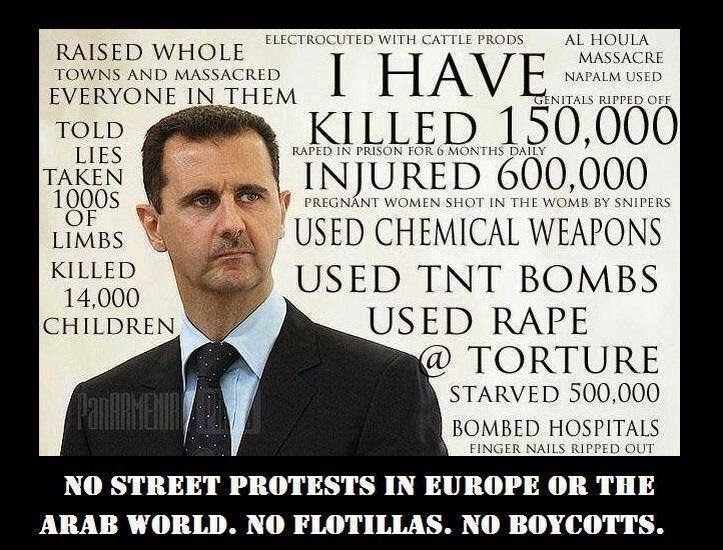 From reading the international and national news you would probably never have known that last Thursday and Friday alone, over 700 people were killed in Syria at the hands of jihadists and pro-Assad forces. Muslim on Muslim, Arab on Arab, human on human, whatever you like to think of it as - Western media is doing an awful job of reporting these abhorrent incidences - and I think I know why.

My colleague Jonathan Spyer from the Global Research in International Affairs (GLORIA) Center, and fellow at the Middle East Forum (full disclosure: a position I also hold) noted it best today when he wrote:

"More than 700 people killed in Syria on Thursday and Friday, in the bloodiest two days of the conflict until now. A woman was executed for adultery in Raqqa. None of the above were killed by Jews, however. This presumably explains the total lack of interest by the , (and of course by the Islamist/far-left crowd who have been  synagogues and so on in Europe in recent days.)"

Yes the preoccupation with how many Muslims are killed by Jews, rather than how many are suffering at the hands of their fellow countrymen/co-religionists is a  of how natural it is for most people to still focus their attentions on Israel and the respectively. Indeed it is this "everyday anti-Semitism" that leads the Guardian to depict the MH17 disaster in the same cartoon as that criticising Israel's operation in Gaza as if there were some link, and indeed which forces thousands of 'pro-Palestinian' activists onto the streets of London [link] to demonstrate against Israel - but not so much against ISIS or Bashar al-Assad.
The Asharq al Awsat newspaper reported on Sunday:

More than 700 people were killed in Syria over the course of Thursday and Friday, in what activists say were the bloodiest 48 hours of fighting in the conflict to date.
The head of the Syrian Observatory for Human Rights (SOHR), Rami Abdul , told Asharq Al-Awsat that this was the first time casualties had topped 700 in the space of two days since the conflict began in 2011. He contrasted the violence to the gas attack in the Ghouta region  to Damascus last year, which he said killed around 500 people.
The UK-based SOHR tracks casualties on both sides of the Syrian conflict by collating reports from a network of observers on the ground in the country.
The final toll was announced after the SOHR reported that 270 people had been killed in fighting between pro-Syrian government forces and militants from the Islamic State of Iraq and Syria (ISIS), when the latter seized the Shaar gas field east of the city of Homs on Friday.

And yet our radios, televisions, and streets are filled with people seekings to condemn and deplore Israel and sometimes even 'the Jews'.
Is it any wonder then, that France feels it has to ban so-called 'pro-Palestinian' rallies?

Finally, the French are ahead of the world on something: recognising anti-Semitism for what it really is… a looming and constant threat to an entire people, furthered by the media, and tacitly endorsed by an unassuming, do-gooder, left-leaning army of full time "activists".
by RAHEEM KASSAM
http://www.breitbart.com/Breitbart-London/2014/07/21/Over-700-Syrians-Were-Killed-Last-Week-But-Jews-Didn-t-Do-it-So-the-Media-Doesn-t-Care/
Posted by Paul Mendlowitz at Sunday, July 27, 2014