Yet, as parasites, they happily accept the health insurance and free benefits available to all Israeli citizens.... 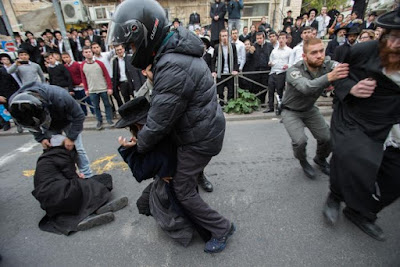 It has happened once again. Riots and protests and struggles and more. This time, not by Arabs but by the ultra-Orthodox Jewish community of Meah Shearim.

I saw a photo in the press of the women of Meah Shearim fighting with our police and waving Palestinian flags. It disgusted me beyond words. The ultra-Orthodox Jewish sect, Meah Shearim (One hundred gates) in Jerusalem has gone mad once more.

I recall Meah Shearim’s “religious revolution” in 1948.  Jerusalem was over-run by troops of the Jordanian Legion. Those Jews who could flee the city did so.  Not the zealots of Meah Shearim.
They came out of their homes waving white flags of surrender. They preferred to live under Arab Jordanian rule rather than to live in a Zionist state. Pictures of bearded Jews surrendering willingly to Jordanian soldiers still fills me with shame and even hatred.

Today’s recent “revolt” was a reaction against the drafting of young haredi men into the army. The Meah Shearim culprits do not recognize the State of Israel nor its flag or anthem. Yet, as parasites, they happily accept the health insurance and free benefits available to all Israeli citizens. But they will not agree to send their sons to the defense of our State nor even to allow them to do civil service where they may become “infected” by association with other Jews very different from themselves.

Many of our Arab citizens are more devoted to the State of Israel than these despicable Jews who take everything but give nothing in return.

The sight of ultra-Orthodox Jewish women waving proudly the Palestinian flag has upset me both physically and emotionally. If they feel an attachment to the Palestinians, they should move into Palestinian areas in the Muslim Quarter of Jerusalem or to some distant place in the West Bank. We don’t need them and we don’t want them. They are a disgrace to our Jewish laws of love and respect and fidelity to the ordinances and regime of the country in which they live.

Some brave haredi men have answered the draft call and serve nicely in our army. But they suffer from family and neighbors in their community when they return home. All of them remove their IDF uniforms before reaching home. And once at home, they are punished by parents, scorned by their community and are infested with guilt.

Meah Shearim madness is nothing new to us. Since the independence of our nation, Meah Shearim residents have frequently revolted against our laws and have committed personal attacks, such as the one in April 2015 when the men and women of the insular community brutally attacked an army officer and threatened to kill him. The attack was condemned by Prime Minister Netanyahu and by the Shas leader, Ariyeh Deri, who called it “an act of terrorism”.

Very often the residents attack police and government officials who enter their community, pelting them with stones, blocking of the streets and burning garbage and rubbish in their streets in an effort to prevent the “goyim” from entering.

Paradoxically, the architect who drew the plan for Meah Shearim in 1846 was a German Christian and a missionary. The community was established in 1875, one of the earliest settlements in the Jewish yishuv outside the walls of Jerusalem’s Old City.

Its men spend long hours every day studying Torah and Talmud.  The women spend their time in producing multitudes of children.

There are signs in Hebrew and English at the entrances to Meah Shearim specifying that women and girls who enter must wear long ankle-length dresses (no shorts or slacks) with long sleeves and a covered neck.

Men and boys are required to wear a hat or yarmulke, long sleeve shirts (no shorts or sleeveless shirts).  All of these requirements are for the sake of modesty.  Infringement of these rules can lead to an attack on the person who violates them.

Many non-observant Israelis despise the residents of Meah Shearim. “We give them everything and they give us nothing” is a frequently heard complaint.

The government could deprive them of some of their benefits but for the sake of keeping the situation calm and to prevent more rioting, it will not take any action.

So we are forced to live (not side by side) with the madness of Meah Shearim’s residents until the prophet Elijah arrives and solves the dilemma. Teiku .