Heaven help us for this total distortion of Judaism! 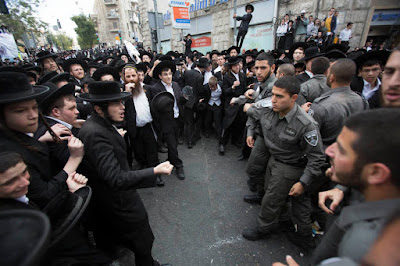 It is unacceptable for so many of you in Israel not to stand still when the siren sounds for the 6 million and for our fallen soldiers. Nor is it acceptable for you to ignore Israel's Independence Day.

Circulating the web in Israel is a video of an ultra-haredi journalist explaining in Hebrew why the haredi community doesn’t stand in respect when sirens are sounded throughout Israel on Holocaust Memorial Day and on Memorial Day for Israel’s Fallen Soldiers, and why they don’t celebrate Israel Independence Day.

The journalist states: “The haredim do not identify with Zionist ideology. We do not celebrate the independence of the State of Israel, nor mourn for the soldiers who fell on its behalf. We believe that observing the Torah is what safeguards the Jewish People.”

First of all, it is true that Hashem promises that the national observance of Torah safeguards the Jewish People. But the way Hashem does this is via the armies of Israel. From the time of Moses, Joshua, and King David, through the days of Mordechai, Yehuda the Maccabee, and Rabbi Akiva, the fighters of Israel have risked their lives in battling the enemies of the Jewish People.

Today, the holy task of defending the Jewish People is entrusted to the Israel Defense Forces, may Hashem watch over them. The Gemara states, “War is also the beginning of Redemption,” (Megilla 17B).  In our daily prayers, we refer to Hashem as, “Master of wars.” Mashiach, may he come soon, will lead the armies of Israel against all of its enemies, (Rambam, Laws of Kings and Their Wars, 11:4). The Torah itself cites a dozen commandments incumbent on Israel’s armed forces.

The assertion that, “The Torah will safeguard the Jewish People” is a hollow claim. The Torah didn’t safeguard the holy communities in Jerusalem and Hevron during the Arab Pogrom of 1929, nor did it save the pious communities in Europe from Nazi bullets and crematories. If not for the IDF, the haredi neighborhoods in Mea Shearim and Bnei Brak would last about five minutes.

The anti-Zionists among the haredim maintain that everything is in the hands of G-d, except the establishment of the State of Israel and the last 100 years of Jewish History – that’s all the work of the Satan.

Heaven help us for this total distortion of Judaism.

The haredi journalist states that standing in silent memory for fallen soldiers is a custom of the Gentiles, and that Jewish Law provides other ways of memorializing the dead. Assuming this is true, does Jewish Law allow for haredim to desecrate the name of G-d, and bring the Torah into shame, when, at the sounding of the memorial siren, many of them continue to go about their business while the rest of the Nation stands in gratitude and respect?

In all fairness, he emphasizes that the anti-social behavior is not a sign of disrespect for the fallen soldiers and murdered Jews, but rather the haredi community’s allegiance to the laws of the Torah – as they interpret them. After all, he adds, many haredi soldiers were killed in Israel’s wars, and in terrorist attacks, and haredi Jews filled Hitler’s gas chambers, although they were not called that then, along with everyone else. Rather, he explains, the haredi community has better ways to honor their memories, such as learning Torah and reciting Psalms, than by standing in silence.

To my way of thinking a religious person can do both. What’s the big deal? I recite Psalms while I stand. Why hold yourself aloof from your fellow Jews, especially when you know that your behavior only causes contempt for religious Jews and Torah?

If these “holier-than-thou” Jews don’t respect the feelings of the rest of the Nation, then instead of enjoying the benefits of living in the State of Israel and getting its government medical services, hospitals, yeshiva subsidies, unemployment benefits, electricity, water, plumbing, street cleaning, garbage pick-up, police and military security, and the like, let them pack their bags and join the infiltrators from Africa on government-paid flights to Uganda.

May the memory of the fallen be for a blessing, may their murders be avenged, and happy Yom Haatzmaut!