Pick a "Kol Koreh" / Rabbinic Proclamation That Works For You! 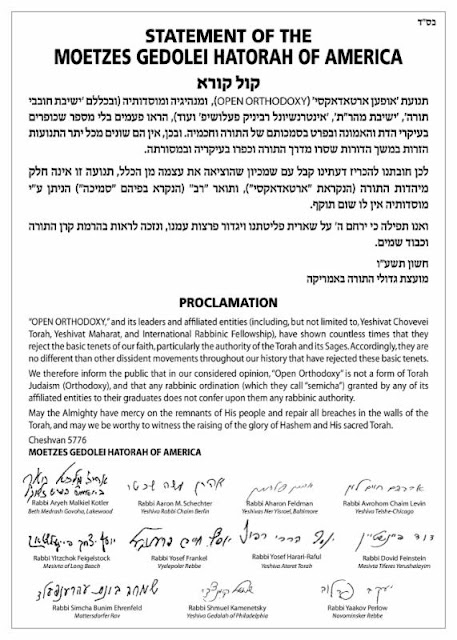 So, The Jewish people are suffering a wave of random terrorist stabbing attacks in our homeland. Islamic State is now making videos in Hebrew threatening annihilation of the Jewish people. Anti Semitism the world over abides and in some places rears its ugly head more often and louder than it has in the recent past. Iran marches on toward the bomb; which they say will be pointed at Tel Aviv, once they get it.


But here in America, rabbinic leadership [sic], both its Modern Orthodox and Chareidi varieties, has determined that the greatest threat to Jewish survival, the two headed devil that has to be beheaded, are a growing group of uppity women who want to dedicate their professional lives to service of the Jewish people and a sub denomination that both supports those rebellious women and dares to ask and ponder questions on Jewish belief and practice to which there are no simple and pat answers.

Around a year ago, when three boys in Israel were kidnapped and murdered, we all extolled the unity that was engendered by that horrific crime. We all knew in our hearts that our strength as a people lies in our fraternal love and unified voice. Well, that's what we projected. But it was a lie, the worst kind of self deception.

The existential threat has not abated. The barbarians remain at the gate. And the threat grows with each day. Achdut? Areivut? Not this time, I guess. The "Gedoilim" have a new idea. Before "they" kill us, we'll kill each other- with words. Let me know how that works out for you.
Posted by Paul Mendlowitz at Tuesday, November 03, 2015