What is it we have to say about the larger issues of religious fundamentalism, patriarchy’s power, women as catalysts for change, and the current schism in the Jewish world around these very issues?

Published in the Spring 2016 issue of Jewish Currents

It's The Fundamentalism Stupid! 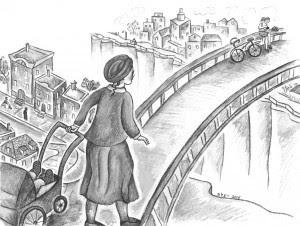 BACK IN THE 1970s, the Orthodoxy I lived within was far less extreme than today’s. It demanded observance of halakha, Jewish law, but we young women were nonetheless encouraged to partake of education and career, even if Sabbath observance, kashrut, a proper marriage, and family concerns all came first. This orientation is known today as “modern Orthodox.” By contrast, the ultra-Orthodox have moved so far into fundamentalism — and with a tinge of violence, in Israel but not only in Israel — that the testimony of these breakaway authors takes on a must-tell urgency and powerful cultural resonance. Critic Laura Blum says of this literary wave, “They are having their Arab Spring.” The parallels are persuasive ­— these writers and artists are in the avant-garde sounding the first notes of a call for self-determination. The analogy is also sobering.

FAIGY MEYER BECAME a tabloid headline last July when she leapt to her death from a Manhattan rooftop bar. Faige (shown below) was not a fictional character, nor did she write a memoir. She was a 30-year-old woman who had left behind her ultra-Orthodox upbringing for a secular life some six years before. Friends said she carried a darkness within that she could not dispel. Since I, too, broke with the Orthodox world of my childhood, I empathized with Faigy’s self-rejection and despair. I imagine that there were days when she felt brave and determined, possibly even powerful and free, but on that summer day when she took the fatal plunge in the Flatiron district, Faigy had once again lost her faith. This time, it was not her faith in religious doctrine but in her own worthiness to live.

Back when I was Faigy’s age, I rarely told people from non-religious backgrounds of my Orthodox origins. Organized religion (as opposed to “spirituality”) was in such disrepute among flower children of the 1970s that it seemed futile to explain where I hailed from and why it hurt so much to leave it behind. Today, however, I am among a cohort of women authors contributing to a successful wave of tell-all, up-from-Orthodoxy memoirs. How has the social climate changed to champion our success? What is it we have to say about the larger issues of religious fundamentalism, patriarchy’s power, women as catalysts for change, and the current schism in the Jewish world around these very issues? And why are today’s readers drawn to our stories? Are these memoirs harbingers of a turning point in an increasingly global, ideological conflict between religious fundamentalism and modern society?

The books consistently trace an arc from their authors’ origins as obedient daughters, through conflicted adolescence, into a full-flowering womanhood in which they seek autonomy of worldview and lifestyle. Their stories are marked by a slow-simmering awareness of their own dissenting spirits, a terror of the unavoidable consequences, and admirable, sometimes sacrificial, courage. For every freedom gained, there is a cutting emotional loss; in some cases, the price a woman pays for her freedom is the right to maintain contact with her own children.

There are, of course, important differences in the stories. Some transitions are smoother, some rockier and more haunted; some of the writers find greater fulfillment in their new lives, others are more bereft. The personalities and preferences of each author emerge within these narrative distinctions, but the overall social significance of their reports lies in the dissident trajectory that they share.

The books owe their appeal in part to the public’s curiosity about daily doings within these hermetic Jewish communities. Uninitiated readers anticipate passing through closed doors. But since the authors, as females, are themselves excluded from central activities such as study, prayer, and leadership, they report from the excluded side of the gender partition. The early action takes place in bedrooms shared with sisters, in all-girls schools, in women’s synagogue balconies, and in their aunts’ and grandmothers’ kitchens, where the girls are indoctrinated in the lavish preparation of food for others.

http://jewishcurrents.org/orthodox-women-escaping-41014
Posted by Paul Mendlowitz at Friday, April 08, 2016 No comments: