She Could Have Been "Sarah The Cool Feminist"! 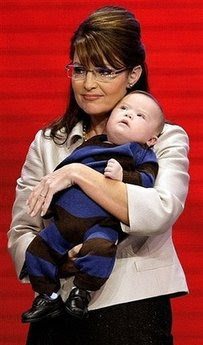 ......But instead chose life for her child over having her doctor use a vacuum cleaner-like device to squish the baby's head and suck him up into the Liberal death machine aka Feminism!

She "could have been a contender" -- but instead chose morality and real "old-fashioned" bible values than outright murder a baby that could not defend himself from Dr. Liberal Death!

She could have been loved by the Hollywood "elite" - but instead chose to be the butt of the SNL Liberal Jewish sickos, who advocate murder machines for babies that don't quite fit their view of the "perfect" baby!

She could have been "Sarah the murderer of her baby", but instead she chose to love her baby forever and ever, regardless of the difficulties involved in raising a child with special needs.

She could have been "Sarah the ruthless plumber", and have chosen to turn this precious life into human waste --- but instead will have the privilege of passing the humanity test - taking care of this child that will depend on her, knowing full well that this "burden" is the ultimate test that will distinguish her from the selfish, pathetic excuse of "free women" who choose "choice" so they may live another day without the burden of bringing comfort to a child in need, so they may attend another party.

The country can't permit two of the most radical liberal demagogues in the senate - Obama number one - Biden number three --- to influence negatively the direction of the greatest country ever - with all its imperfections!

If you're able to stomach the actual killing of a baby - click on the other video options at the end of this clip. Both Obama and Biden claim that this murder is totally the choice of the "mother" and her doctor --- and just as Obama would meet with the "leader" of Iran without preconditions, the mother of a defenseless child needs no particular reason to destroy this precious life, other than because she wants to --- to suit her personal agenda!