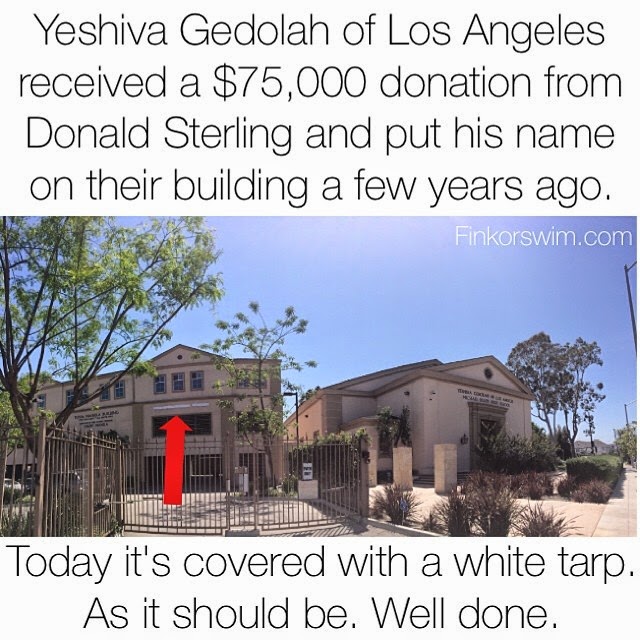 Personally, I do not care what Sterling said to his girlfriend in private; the man is a lowlife in the worst order! His actions  ----  being a miserable philanderer his entire life and having the prostitutes on his arm at the Clippers games for all to see, to me, are worse than what came out of his filthy mouth in the confines of his home.

Yet, Yeshiva Gedolah had no problem putting his name on their building and taking his filthy money!

Even the NAACP - yes, that pathetic reverse racist organization, will stop honoring him for now!

BMG, the Agudath Israel and numerous other organizations --- know --- that the entire NBA --- you know the guys that get paid million$ to throw a ball in a hole - were on the verge of NOT playing ball until Sterling was removed from their organization!

Jews are just not that smart!

LOS ANGELES (AP) — Donald Sterling has been known to heckle his own team from the center-court seat where he has sat for decades, whether with his now-estranged wife or women young enough to be his granddaughters.

Sterling has faced extensive federal charges of civil rights violations and racial discrimination in business, making shocking race-related statements in sworn testimony before reaching multimillion-dollar settlements. He has also been sued for sexual harassment by former employees, and the court proceedings detailed an outlandish list of Sterling’s personal proclivities.