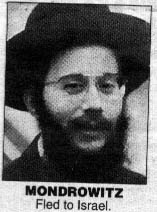 Hynes' request to the U.S. Justice Department that Rabbi Avrohom Mondrowitz face justice has been forwarded to the Israeli Ministry of Justice. Mondrowitz, a onetime popular child psychologist in Brooklyn's Borough Park, was indicted in February 1985 on charges of sexually abusing four boys, months after he fled.

Former Brooklyn District Attorney Elizabeth Holtzman tried for years to extradite Mondrowitz, but Hynes had resisted. Critics charged Hynes was afraid of offending the powerful Orthodox Jewish voting bloc and only changed his mind because of a change in the community's attitude toward pedophilia. His spokesman, Jerry Schmetterer, denied the allegation.

"That had no impact on our decision at all," he said, saying an amendment to the extradition treaty allowed Hynes to act.

Hynes' decision has brought some relief to the alleged victims, including a rabbi who told Hynes that Mondrowitz, a neighbor and father of his friends, had molested him at the age of 11 in the late 1970s.

Mondrowitz declined comment when reached by telephone in Israel.

I greatly appreciate the plaudits my work has received on this blog. And I do cherish the belief that both the publicity and the legal activism I helped bring to this case have made a difference.

But I must stress that a share of any credit due rightfully belongs to everyone who has helped to make an issue of this case, whether with the D.A.'s office, the press or one's local Orthodox rabbi.

And the greatest honor must be reserved for victims who risked opprobrium, ridicule and emotional trauma to demand the justice that is every victim's right and each community's obligation -- an obligation that, alas, our communities have been slow to respect.

Finally, though I can't speak for everyone, my own goal is not so much to punish Mondrowitz -- though he deserves to be punished if anyone does -- as to vindicate the victims' right to know that what was done to them was a crime. . . not an unfortunate occurrence, not a personal tragedy, but a crime for which their attacker, not themselves, was to blame.

And I also want each victim to know that his fellow human beings utterly detest and reject any suggestion that the vindication of his violated humanity (which is what the criminal justice system is supposed to be about) mattered less than a community's public image. My work will not be over while any doubt on that question still lingers.