And His Name Aint Moish! “It's unreal,” he said. “He's the last person you'd expect to do this. 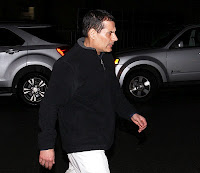 A pervy Queens computer teacher with a shady past was nabbed Thursday for fondling two young students, officials said.

Wilbert Cortez, 49, is accused of touching the genitals of two boys — now ages 8 and 9 — and rubbing their buttocks at Public School 174 in Rego Park last school year, the Queens District Attorney’s office said.

Cortez — who has been teaching in city schools since 1986 — was charged with two counts each of second-degree course of sexual conduct against a child and endangering the welfare of a child, law enforcement officials said. He faces up to seven years in prison if convicted.

Cortez - who is being represented by attorney Donald Vogelman - was arraigned in Queens County Criminal Court Thursday night and released on $50,000 cash bail.

“He turned himself in to detectives,” Vogelman said after the court proceedings. “These are just allegations [and\] he intends to fight these charges.”

Cortez is due back in court on March 19.

According to a police source, at least seven other children have come forward with abuse allegations since the start of the investigation.

In a letter from Principal Karin Kelly sent to parents on Thursday, authorities of the school were notified of the allegations in October 2011.

The NYPD and the Special Commissioner of Investigation (SCI) were notified and Cortez was reassigned - away from children - in a central office on Oct. 27, the letter said.

Parents were also urged to notify the NYPD if they suspect their child was harmed or if they know anything about the incident.

"I am appalled by the allegations against Wilbert Cortez," said city Schools Chancellor Dennis Walcott. "No adult who inappropriately touches a student, in or out of school, belongs anywhere near the children we are responsible for protecting."

This wasn’t the first time Cortez was accused of acting inappropriately with children.

He was accused of slapping two students on the buttocks in three incidents during the 1999-2000 school year at PS 184 in Brownsville, according to the SCI report.

Cortez summoned a young boy to his classroom and was alone with him when he came up behind him, "wrapped his arms around the boy and, while rubbing [his\] chest, pulled the child toward him," according to the document.

The investigation revealed that the boy in that incident went to teacher John Evbomenya - on three separate occasions - about Cortez’s behavior, even once describing a “bad touch.”

Evbomenya “did not report the allegations to anyone because if they were not true, Cortez’s career would be ruined,” the report states.

It wasn’t until one of the victim’s fathers alerted Principal Jeanette Reed that an investigation started.

“Information from the students clearly established a pattern of inappropriate conduct by Cortez,” the report reads.

“Moreover,” the report continues, “he must be advised that future misconduct will result in termination of his employment.”

It was not clear if Evbomenya was reprimanded for failing to report the abuse. He could not be reached for comment.

Cortez received a disciplinary letter in his file in 2000, sources said, calling it a "slap on the wrist."

Parents at PS 174 were demanding answers Thursday as news of Cortez’s arrest spread.

"They moved him to our school? “I'm outraged, I'm appalled,” said Cortez’s neighbor Sherry Nicot, 42, whose 5-year-old son was one of his students. “This is a pedophile. My son is 5-year-old and he is my son's computer teacher. Are they saying it's OK for pedophiles to teach our kids?”

Nicot described Cortez as a man with a personality “where the kids gravitate to him.”

Torres said Cortez was a “fitness freak” who loved to ride his bike and never drank or smoked.

“It's unreal,” he said. “He's the last person you'd expect to do this.

Sonia McCarthy, 31, whose 8-year-old daughter is in second grade at the Queens school was sickened upon hearing of Cortez’s history of abusing children.

“They have to get him out,” she said. “Why did they cover this up? He shouldn’t have been teaching here in the first place.”