He had these weird ideas...like every Jewish child must be granted a Jewish education...free if necessary. Every major city in the world, starting with the United States...should have a Hebrew school staffed with educated, qualified, religious, career teachers.

Every Jewish child should be educated according to his/her abilities; set up separate parallel classes for the brightest...and classes for the beautiful children that did not necessarily like learning, that would rather play ball. He actually understood that. He forced his best students out of the bais medrash during the lunch hour and on to the playground. Exercise was important for everyone.

Children that came from "modern" homes were not permitted to change their dress - to "hasidic" garb. Tzizis...were to be neatly kept in their pants pockets, and peyos were to be combed around the ear - if you came to the yeshiva with them -- if not -- you needed to keep and respect the dress code of your parents. You had to be immaculate in your appearance.

This was some strange guy!

Girls had to be formally educated - both in limudei kodesh - Hebrew studies - and secular studies. He fought tooth and nail against the fanatics that wanted to keep girls at home - learning to cook and clean and some home-study. (Urged them to learn that from their mothers' - at their leisure.)

Boys had to excel - according to their abilities - both in their Hebrew and secular studies. If you failed in mathematics, history or English - you risked being penalized. (knass - or money sanctions...or even expulsion)

Where did this strange dude come from?

He was brought to tears, everyday, at least three times...at v'Yerushalayim ircha b'rachamim tashuv...v'sihkon b'socha k'asher dibarta....He cried real tears when his students were in pain, emotional or otherwise. It affected his ulcers drastically when people suffered; all Jewish pain was personal. He understood pain - if any one ever did. He understood "responsibility." He understood dedication to the klal...and every living, breathing moment was on fire...with that commitment.

He never had a personal savings bank account...it was a failure in bitachon. Hashem provides, and will always.... if you do your part - with serious hishtadlut ! When Mr. Irving Bunim put down the down payment ($5G) for his house in Monsey - New York, this rabbi made certain it was in the name of the yeshiva (against the express wishes of the benefactor), and that fair market value rent - was deducted from his meager paycheck.

He borrowed money for students that he felt needed to leave the yeshiva...and helped them to start businesses with personal loans. He encouraged others to get jobs. He encouraged many to go to college - in to the professions - and only the few totally dedicated boys were to stay in learning - full time - for more than a very brief period of time. This was a man who understood the stark realities of life...and what it meant not to make a living; and the broad - forever - wide-reaching ramifications on the entire family's well-being if there was no food in the ice-box.

This was a wild & crazzzzy guy!

Where are those rabbis? What happened to us? How did we drift so far apart from Torah values - that we don't know right from wrong, legal from illegal, sane from insanity, truth from blatant falsehoods, real from unreal, rational from irrational, and seemingly profane from seriously profane?............

We sold away our traditions for money, kavod, power, a few minutes in the spotlight; and whored ourselves for every single secular - anti-Torah value that we once died for! 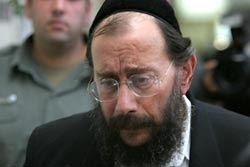 The Jerusalem District Court ruled on Monday that Avrohom Mondrowitz, an ultra-Orthodox man who fled the United States for Israel two decades ago to avoid sexual abuse charges, must remain in custody until the end of legal proceedings against him.

The United States seeks the extradition of Mondrowitz, 60, a member of the Gur Hasidic sect, and the court ruling stemmed from the suspicion he may attempt to escape Israel before his extradition.

Mondrowitz was arrested in Jerusalem in November of last year for allegedly abusing dozens of children at his unlicensed psychology clinic at his Brooklyn, New York home during the 1980s. He fled to Israel in 1985 as police were investigating charges against him.

The renewed U.S. request came after Israel and the United States amended their extradition treaty to include all crimes whose punishment is more than one year imprisonment, according to Israel's State Prosecutor's Office. Before the change that took effect last January, the extradition treaty between Israel and the United States did not include sodomy.
Posted by Paul Mendlowitz at Monday, January 14, 2008 No comments: