I hate to say it, but we have come to a place where Israel really needs to ask whether it will simply be reduced to a Jewish Iran.... 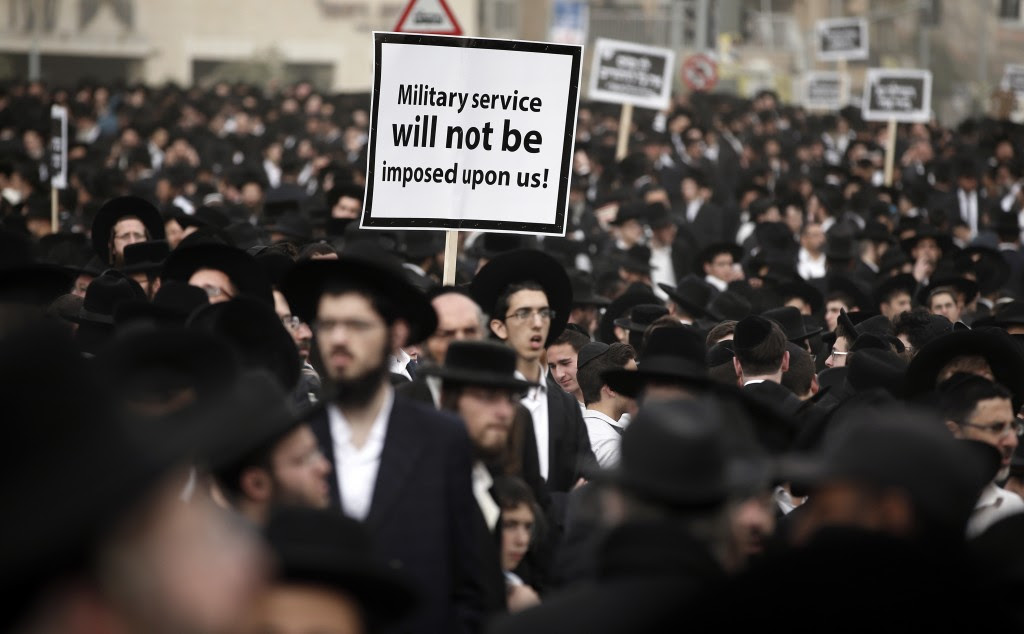 
So this is one of those moments that call for calm, which is really to say, that I’m not feeling very calm at all, and I’m telling myself, “Calm down.”   I start there, because one of the things I do know is that urgency, even when justified, can get away from us in a heartbeat.  So, with that in mind, here’s the deal:

Israel’s Supreme Courts struck down a law which largely protected Israel’s ultra-Orthodox community from the country’s otherwise compulsory national service system.  There were, and continue to be, exceptions, but they are few and far between.

The law which was struck down, was actually a relatively new statute – one passed as a compromise between an older iteration of the same protection afforded ultra-Orthodox men and an effort to end that protection, by trying to encourage greater ultra-Orthodox participation in the system. The newer, and just struck-down, law was based on the premise that sought to get a few more of these previously exempted guys in to service every year, then that would be good enough for the time being.

It turns out however, that over the last number of years the number of ultra-Orthodox Jews participating in national service in Israel not only has not gone up, it has actually gone down.

A lawsuit was brought in light of that trend, and the Supreme Court ruled that if the basis of the new deal was that increasing numbers of citizens would participate and, in fact, fewer are, the law is a failure and can be struck down.

The ultra-Orthodox rabbinic establishment is going crazy about this, but that is neither surprising nor the real story here. The real story lies in the specific responses of those leaders, not the circumstances to which they’re responding, because within their responses, there are lessons for all of us, however we feel about this issue.

Now, to be clear, I’m thrilled with the court’s decision. I am thrilled because it shatters a deal made 70 years ago to exempt 400 men from service because they were actively involved in religious study, ended up exempting between tens of thousands and hundreds of thousands of people, depending upon how you count.  The deal, as originally brokered, had become absurd when applied to contemporary reality.  But as I have already pointed out, that is not the real story.  What is?

When someone says they’ve had just about enough I say, “Bring it on.” I would absolutely love that. But that’s even not the biggest story here.

The really big story here is that emissaries of the ultra Orthodox leadership have already been in touch with Israel’s Prime Minister, Benjamin Netanyahu – reaching out to him even as he is currently traveling in South America — and submitted draft texts of a replacement law.  That draft text of that law includes the fact that, upon its hoped for passage, not only will it guarantee the ongoing exemption system, but that said new law will be beyond legal review by the Supreme Court.  That’s actually terrifying.

Whatever one thinks about this system of exemptions, good or bad, and I’m clear about what I feel, the idea that the state could pass a law in which the Supreme Court cannot act as corrective on what politicians do, in which laws are not available for review, and specifically not available for review when enacted by those who desire a theocratic state. I hate to say it, but we have come to a place where Israel really needs to ask whether it will simply be reduced to a Jewish Iran.

I don’t like saying that. I’m even a little scared to say that. I know that other people will say, “We’ve been saying that for a long time. You’re just waking up now, Brad?” I am saying it now, because this is the first time when it’s not about a matter of policy, but when it speaks to a much more significant principle which has implications for all of us, and for all countries around the world, when that principle is challenged.  That principle is the need for checks and balances. We all need them. All governments need them, and all people need them. And what’s really at stake here is an attempt to circumvent a system of checks and balances, which is most necessary at moments like this when things get so polarized and the only thing we can see is what we already believe.

The idea that a group of religious leaders could coercively make rules, is bad enough. The idea that one could imagine encoding them as law which is not up for review by an independent institution, is actually kind of terrifying. But it’s not just terrifying for Israel.

Any time any of us supports a system, which has no checks and balances, however well-intentioned we are, however well-meaning we may be, whatever sources of authority we are invoking, it’s not going to end well. So if we’re going to learn anything from this moment, it would be where are the checks and balances in our own systems, — Systems of government, systems of living, and in our own relationships — because if we have them in place, we can actually afford to take all kinds of chances. And if we don’t, we’re in big trouble.