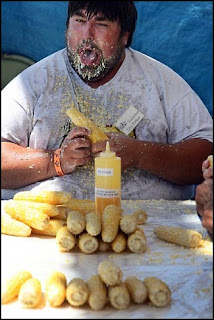 By "Both versions of the story are correct":

East Brunswick, New Jersey (CNN) -- Fressers entered their third day of a building takeover at the East Brunswick Hilton on Saturday in protest of an unexpected fee on food that had been previously advertised as free, a mechoah that an Agudah spokesman called futile.

The occupation of the hotel is just one of several demonstrations across Agudah institutions this week after the Agudah's board approved a $32 per person fee for the meat carving station on Thursday.

Agudah officials said the $505 million to be raised by the fee is needed to fight lawsuits that they say could arise from the Markey Bill.

Protesting fressers said the fee will hurt the stomachs of working and middle-class Yidden who benefit from Agudah-funded fressing.

In East Brunswick, where the rioting began last week in the tea room due to stale cookies, about 100 fressers staged a sit-in in the lobby soon after hearing that the fee had been approved, according to Agudah trustee Israel Lefkowitz who tried to drive his Town Car inside to confront them.

YTT Spokesman Yankel Applegrad told CNN that Rabbi Lipa Margulies had been safely spirited out of the hotel by his bodyguards, contrary to earlier reports that he had been trampled when joining a horde of people trying to break into the kitchen to raid the chulent.

The fressers made a list of 20 "demands" detailing how they want the Agudah to increase free gourmet food, spokesman Avi L. Shafran said. But the Agudah has no plans to negotiate the demands with the fresser body, he said. The Agudah just doesn't have the money, which is the same reason why no high end chocolates would be served this year, he added.

Agudah officials hope the fressers realize that their demonstration is "not accomplishing anything" and is "just a disruption" to the duty of combating UOJ, he said.

The Agudah will continue to wait out the takeover, but Shafran said he is unsure of how long it will last. The Agudah hopes the fressers will leave voluntarily without grabbing to chapp aus London Broil, he said.

Meanwhile, uprisings on other campuses have quieted since earlier mass demonstrations.

At Flatbush's Agudah of Ave L on Shabbos night, 41 protesters occupying the shul when they learned there was no sponsor for kiddush, were arrested. Authorities decided to cite them for trespassing and release them rather than take them to jail, per an agreement with Agudah leaders, Brooklyn DA spokesman Jerry Schmetterer said. Three fressers had already been arrested there Friday morning in "Leon Goldenberg's coffee room" when they ran out of sugar cubes.

Fifty-two fressers were arrested at the Agudah of Baltimore late Thursday after they refused to vacate the building in a protest over possible upgrading of standards at the Star-K.

And Agudah HQ at 42 Broadway in Manhattan was occupied for several hours Thursday evening. The angry protesters there are condemning a nearly $2,000 yeshiva tuition increase after the organization dropped the ball on lobbying Albany.