The Vatican has been at best indifferent and at worst, like today, willfully harmful to the Jewish State.... 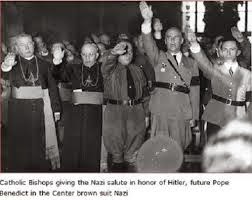 Op-Ed: The Vatican has Always Tried to Inflict Damage on the Jewish State

A few days ago, before his deplorable meeting with PA Chairman Mahmoud Abbas,  the Vatican choose to recognize the “State of Palestine” in a historic move severely criticized by Israel. The Zionist Organization of America rightly condemned it as “the Pope recognizing Jew/Christian-Hating Palestinian State”.

There is nothing new under the sun. Despite the fact that there are many Catholics around the world who share a pro-Israel attitude, the Catholic Church has always been at war with the Jewish State and did everything in its power to prevent its establishment and then to derail it.


After the pro-Jewish Balfour Declaration of 1917, the Vatican’s opposition to Jewish territorial sovereignty grew more entrenched. In the years after the Holocaust, Vatican anti-Zionist policies attempted to block the partition of Palestine at the United Nations, and to secure Jerusalem as an international, sovereign “corpus separatum”, which was meant to prevent the Jews from setting a foot in the Old City of Jerusalem and on the Temple Mount.
Two major cardinals were active in British Palestine in the first twenty years of the 20th century: the British Francis Bourne and the Italian Filippo Giustini. Cardinal Bourne in 1919 sent a letter to the then British government, writing that Zionism had not received the approval of the Vatican, and that if the Jews would “ever again dominate and rule the country, it would be an outrage to Christianity and its Divine founder”.
Cardinal Giustini in that year cabled the Pope from Jerusalem asking for his intervention “to prevent the re-establishment of Zionist Israel in Palestine”. In another letter from Jerusalem, Cardinal Bourne defined Zionism as “contrary to Christian sensitivity and tradition”.

“There was no real reason why the Jews should be back in Palestine. Why should not a nice place be found for them, for instance in South America?”.

Cardinal Pietro Gasparri, who was Secretary of State under two Popes (Benedict XV and his successor Pius XI) said that “the most dangerous threat is the creation of a Jewish State in Palestine”. Gasparri claimed that, “It is better [to have] the internationalization of the Holy Sites rather than see Jerusalem in the hands of the Jews”. Then Latin Patriarch of Jerusalem, Luigi Barlassina, condemned the creation of an “autocratic Zionist domination” in many articles and dispatches to Rome.
And during the ‘30s, while the Jews were under attack in Germany and Italy, Domenico Tardini, the Vatican Undersecretary of State, told a British diplomat in 1938: “There was no real reason why the Jews should be back in Palestine. Why should not a nice place be found for them, for instance in South America?”.
The Vatican not only opposed the Balfour declaration at the League of Nations, it also endorsed the British “White Paper”, which fought the Jews’ right to immigrate to their Holy Land.
Even Archbishop Angelo Roncalli, later to become Pope John XXIII and recognized by some Jews as a friend, wrote that he was “uneasy about the attempts of Jews to reach Palestine, as if they were trying to reconstruct a Jewish kingdom”.
At the peak of the Holocaust, the Vatican’s main thought was to oppose the creation of a Jewish State, which if it would had been established before could have saved many Jews fleeing Hitler. Pope Pius XII made his opposition toward a Jewish homeland known to Franklin Delano Roosevelt. Dated June 22, 1943, the letter sent by Amleto Cicognani, the Pope’s special representative to the US, to Ambassador Myron Taylor, Roosevelt’s emissary to Pius XII, made Pius’s policy against Zionism crystal clear.
On 10 April 1945, while the war was still going on in Europe, Moshè Sharet of the Jewish Agency, was received by Pope Pius XII. He hoped for the “moral support” of the Catholic Church for “our renewed existence in Palestine”. But he did not receive any support; on the contrary the Vatican started a new campaign for “the internationalization of Jerusalem” supported by France, another name used to deprive the Jews of their homeland.
Giorgio Hakim, then Catholic bishop of San Giovanni d’Acri, in 1947 delivered a letter by the Muftì of Jerusalem to the Pope in the Vatican — who had been an ally to Hitler in the “final solution” — against Israel’s projected establishment. Pius XII reacted “very cordially”. In 1948, when Israel was fighting six Arab armies which wanted to annihilate the tiny and fragile Jewish State, the Catholic press and the Vatican officials attempted to tie the Arab Christian refugee crisis into its general critique of “Israeli incursions” and “Jewish imperialism”.
In 1949 the Italian embassy in the Vatican dispatched a message that the Holy See had the opinion that “the Israelis are using against the Arabs the same methods that the Nazis used against them”.
I could go on with this list of Vatican’s attempts to derail the creation and survival of the State of Israel. Emanuel Ringelblum, the great historian of Polish Jewry who was killed during the Holocaust, noted that during the war “when the blood of Jewish students was shed and anti-Semitic savages rioted, the clergy either kept silent or approved these deeds...”.
Those words, pronounced by a hero of the Warsaw ghetto, could be used also today for the Vatican’s indifference to Israel’s mortal siege. And just as it did in World War II, by choosing to recognize the “State of Palestine,” the Vatican made common cause with an evil Palestinian Arab Islamic power in a vain attempt to buy temporary security for their own communities.
But despite these attempts, the Jewish people will grow in its land and city. All the land is theirs. Period.
http://www.israelnationalnews.com/Articles/Article.aspx/16943#.VVtd51JinzK
Posted by Paul Mendlowitz at Thursday, May 21, 2015