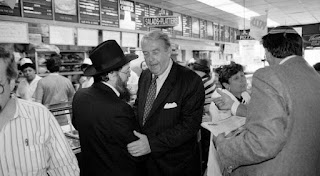 An influential rabbi came last summer to the Brooklyn district attorney, Charles J. Hynes, with a message: his ultra-Orthodox advocacy group was instructing adherent Jews that they could report allegations of child sexual abuse to district attorneys or the police only if a rabbi first determined that the suspicions were credible.

The pronouncement was a blunt challenge to Mr. Hynes’s authority. But the district attorney “expressed no opposition or objection,” the rabbi, Chaim Dovid Zweibel, recalled.

In fact, when Mr. Hynes held a Hanukkah party at his office in December, he invited many ultra-Orthodox rabbis affiliated with the advocacy group, Agudath Israel of America. He even chose Rabbi Zweibel, the group’s executive vice president, as keynote speaker at the party.

Mr. Hynes has won election six times as district attorney thanks in part to support from ultra-Orthodox rabbis, who lead growing communities in neighborhoods like Borough Park and Crown Heights. But in recent years, as allegations of child sexual abuse have shaken the ultra-Orthodox Jewish community in Brooklyn, victims’ rights groups have expressed concern that he is not vigorously pursuing these cases because of his deep ties to the rabbis.

Many of the rabbis consider sexual abuse accusations to be community matters best handled by rabbinical authorities, who often do not report their conclusions to the police.

In 2009, as criticism of his record mounted, Mr. Hynes set up a program to reach out to ultra-Orthodox victims of child sexual abuse. Called Kol Tzedek (Voice of Justice in Hebrew), the program is intended to “ensure safety in the community and to fully support those affected by abuse,” his office said.

In recent months, Mr. Hynes and his aides have said the program has contributed to an effective crackdown on child sexual abuse among ultra-Orthodox Jews, saying it had led to 95 arrests involving more than 120 victims.

But Mr. Hynes has taken the highly unusual step of declining to publicize the names of defendants prosecuted under the program — even those convicted. At the same time, he continues to publicize allegations of child sexual abuse against defendants who are not ultra-Orthodox Jews.

This policy of shielding defendants’ names because of their religious status is not followed by the other four district attorneys in New York City, and has rarely, if ever, been adopted by prosecutors around the country.

Some sex-crime experts and former prosecutors said the policy contributed to a culture of secrecy in ultra-Orthodox communities, which made it harder to curb sexual abuse.

Mr. Hynes, through a spokesman, said he would not publicize information about specific accusations because he did not want to discourage victims from coming forward. But at least one ultra-Orthodox rabbi acknowledged asking him not to publicize these cases and said other rabbis had as well.

The number of sexual abuse cases involving children being prosecuted by Mr. Hynes’s office is up sharply. But an examination by The New York Times shows that some of Mr. Hynes’s claims about the Kol Tzedek program appear to be inflated.

Through an extensive search of court and other public records, The Times determined the names of suspects and other details in 47 of the 95 cases attributed to the Kol Tzedek program. More than half of the 47 seemed to have little to do with the program, according to the court records and interviews.

Some did not involve ultra-Orthodox victims, which the program is specifically intended to help. More than one-third involved arrests before the program began, as early as 2007. Many came in through standard reporting channels, like calls to the police.

While the 47 cases did include charges against camp counselors, yeshiva teachers and rabbis, they also included cases like that of a Borough Park cafe owner who was convicted of molesting a female Hispanic immigrant who worked for him.

At least three others were of ultra-Orthodox defendants who groped women on public transportation, including one Borough Park resident accused of placing his penis on a woman’s shoulder. The woman immediately called the transit police......

READ ENTIRE ARTICLE:
http://www.nytimes.com/2012/05/11/nyregion/for-ultra-orthodox-in-child-sex-abuse-cases-prosecutor-has-different-rules.html?hpw
Posted by Paul Mendlowitz at Thursday, May 10, 2012 No comments: