"A searing indictment of putative religious Jews – from Modern Orthodox Jews to chasidic and the black hat, yeshivish community – who have in effect reintroduced a system of child sacrifice, sacrificing the interests of children (young boys and girls are overwhelmingly the victims of Orthodox Judaism’s sexual abusers) to those of the accused abusers and to the Orthodox community’s perceived image in wider society...." 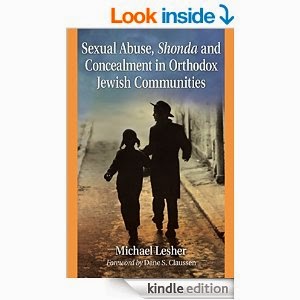 http://www.amazon.com/dp/B00M7CH5ES/ref=rdr_kindle_ext_tmb
Sexual Abuse, Shonda and Concealment in Orthodox Jewish Communities: Michael Lesher, McFarland & Company, 287 pps. $45.
The disgrace of sexual abusers (nearly entirely men) who identify themselves as Orthodox Jews is a well-known subject, covered extensively in recent decades in the Jewish and general media.
Lesher, an attorney whose specializes in this part of family law, is a longtime community activist on behalf of the victims of sexual abuse. He is an outspoken critic of what he sees as a failing of the Orthodox community he came to as an adult. His book concentrates on one disturbing aspect of the phenomenon – the propensity of Orthodox Judaism’s leaders and rank-and-file members, in the United States and Israel, to defend and support the abusers, at the expense of the victims and the victims’ families.
He writes, as he summarizes in the book’s introduction, about “how influential rabbis and community leaders have sided with the alleged abusers against their victims; how victims and witnesses of sexual abuse have been pressured, even threatened, not to turn to secular law enforcement for help; how autonomous Jewish ‘patrols,’ displacing the role of official police in some large and heavily religious Jewish neighborhoods, have played an inglorious part in the history of cover-ups; … how some Jewish communities have even succeeded in manipulating law enforcement officials to protect suspected abusers.”
This makes for a hard read, a searing indictment of putative religious Jews – from Modern Orthodox Jews to chasidic and the black hat, yeshivish community – who have in effect reintroduced a system of child sacrifice, sacrificing the interests of children (young boys and girls are overwhelmingly the victims of Orthodox Judaism’s sexual abusers) to those of the accused abusers and to the Orthodox community’s perceived image in wider society. According to Lesher, the children and their family members who take steps against abusers are usually regarded as traitors who unfairly harm the lives of the abusers and the abusers’ families; it’s “blame the victim” to an unconscionable degree.
Lesher painstakingly documents case after case of a communal mentality of Shah! What will the goyim think? It’s a mentality that bullies and ostracizes and often silences the victims who dare bring the crimes of Orthodox Jews to the secular criminal justice system and to any type of media. He writes of the indifference and hostility that the victims encounter. He covers the familiar territory of a corrupt beit din (rabbinic court) system and cites the self-serving misuse of Jewish law and of Jewish history to justify Orthodox Jews turning their backs on the victims. He describes, in the words of one chapter’s title, a “culture of denial,” an Orthodox community in which accusations against victims have become orthodox behavior.
Lesher names names – among them, the revered leaders of the Orthodox community – who, he claims, almost without exception help foster a cover-up of sexual abuse committed by ostensibly Orthodox Jews.
“’Cover-up’ is the only appropriate name for the deliberate evasion of a highly topical reality,” he writes. “I must add, sadly, that few in Orthodoxy have broken this code of silence.”
The Jewish media are culpable, Lesher writes. He is critical of Jewish newspapers that steer clear of these stories or publish them sparingly.  The book has mostly praise for this newspaper, which broke the story of the Orthodox Union’s Rabbi Baruch Lanner 15 years ago, but Lesher also takes issue with what he sees as undue caution in some instances. (Full disclosure: I, an Orthodox Jew, formerly lived in Passaic, N.J., Lesher’s home community. I have known him for several years and have written about sexual abuse many times in these pages.)
Lesher writes about a few maverick Orthodox Jewish leaders who have challenged “the toleration of abusive sexuality,” but he finds far more villains than heroes.
Not surprisingly, Lesher has come under frequent criticism in parts of the Orthodox community for bringing the subject of sexual abuse, and its cover-up, to light. “Writing this book is, among other things, an act of faith on my part,” he writes. “Call it the concrete expression of a belief – that I will yet have some sort of answer from those who, like me, see religion as a way to strengthen the innocent, and perhaps also as an aid to giving some of the world’s ugliest crimes against the most defenseless victims their true names.”
steve@jewishweek.org
http://www.thejewishweek.com/arts/books/sexual-abuse-shonda-and-concealment-orthodox-jewish-communities-michael-lesher-mcfarland