Rabbi Nochum Rosenberg of Brooklyn, New York, and a controversial figure in its Williamsburg-neighborhood Chasidic community, was physically accosted this evening by dozens of angry Chasidim in London’s Stamford Hill, after he visited today that community to assist in a private matter.

Seeing a hostile situation about to erupt out of control, Rabbi Rosenberg managed to flee to a passing police car, which carried him away to safety. He is currently being held under protection of the Met, London’s police force, until his departure and return to the U.S.

Rabbi Rosenberg is well-known for helping establish mikvaos all over the world over the past 20 years. His notoriety has spiked in recent months, however, due to his newly-adopted personal crusade against an internal communal problem which he claims goes ignored and untreated in the Orthodox community: molestation of children.

His advice/support hotline and call-in phone show, which he claims draws 10,000 listeners, has labeled specific prominent rabbis and educators as perpetrators, earning him a ban by several dozen New York rabbonim a few weeks ago on grounds of unnecessarily vulgar and graphic language, not to mention exposure of otherwise reputable individuals.

Mr. Rosenberg appeared a couple of weeks ago on a Jewish talk radio show , where he vowed he will not stop his crusade despite a ban against him. 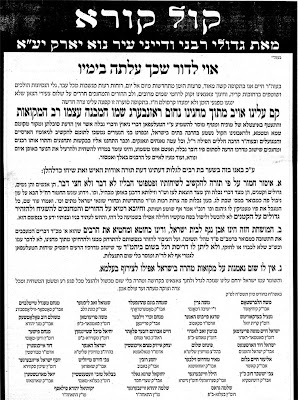