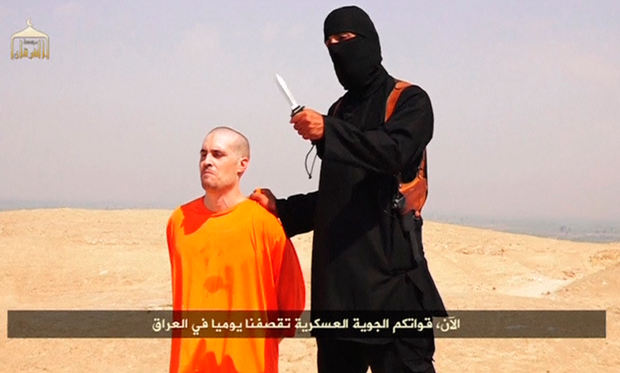 To be consistent here is how the NY Times, CNN, the Washington Post, MSNBC and the LA Times should report the death by beheading of the US journalist James Foley:
James Foley was a journalist and investigator into the poverty and underlying grievances behind Middle East terrorism. Foley appears to have died in mysterious circumstances, at the same time that a large number of ISIS activists were killed by American military intervention. The total number of victims of violence over the past week was 340. ISIS is a group of misunderstood militants that is motivated by frustration that its grievances are not being addressed and its reasonable demands met. ISIS emerged because of the inequalities in the world, the underprivileged situation of so many Muslims in the Middle East. Clearly all ISIS wants is its fair share of the pie, but selfish Westerners have refused to conduct good faith negotiations with the leaders of ISIS. Since these leaders had no other choice, they captured Foley and he then became a victim of the cycle of violence begun by the United States. Foley's death was clearly a protest against occupation of Iraqi and Afghan territory by the United States and against European colonial oppression. There is some confusion as to whether ISIS was in fact behind the death of Foley. Informed sources on the ground in Iraq and Syria say that Israeli Jewish settlers really killed Foley. In any case, it is clear that this sort of violence can only end when the American government conducts good faith negotiations with ISIS and meets its reasonable demands.
https://www.facebook.com/steven.plaut.9?fref=nf
Posted by Paul Mendlowitz at Thursday, August 21, 2014

"22 Years from Auschwitz to Sharm el-Sheikh" - Spivak is Eloquent but Fundamentally Wrong!