The charges involve five main cases. In the first, Metzger allegedly took bribes from rich foreigners seeking to convert to Judaism or determine their religious status. The alleged go-between was Rabbi Gabriel Cohen, head of the Los Angeles rabbinic court. Cohen allegedly gave Metzger half of each bribe. In one case, from 2011, Metzger referred to Cohen a Russian businessman who had immigrated to Israel and wanted his two children converted. After the conversion, Metzger and Cohen allegedly split evenly between them the $360,000 the man paid

Former Chief Rabbi of Israel, Yona Metzger (l) seen at the Jerusalem District Court during his trial, where he is suspected of taking bribed, fraud, and involvement in criminal activities, on July 21, 2016. (Yonatan Sindel/Flash90)

Former chief rabbi Yona Metzger is reportedly to be jailed for three and a half years in a plea bargain about to be signed.

Metzger will plead guilty to fraud, theft, conspiracy, breach of trust, money laundering, tax offenses and accepting bribes. In addition to serving jail time, the state will foreclose on an apartment in Metzger’s name in central Tel Aviv.

The plea deal was offered after months of negotiations between Metzger’s attorneys and senior officials in the State Attorney’s Office, the report said.

In March of last year, Metzger’s trial began at the Jerusalem District Court, with Metger facing charges of accepting some NIS 10 million in bribes through various nonprofit groups, and keeping about NIS 7 million ($1.8 million) for himself.

Metzger stepped down as chief rabbi on July 24, 2013 due to the pending fraud investigation, just before the end of his 10-year term in office. 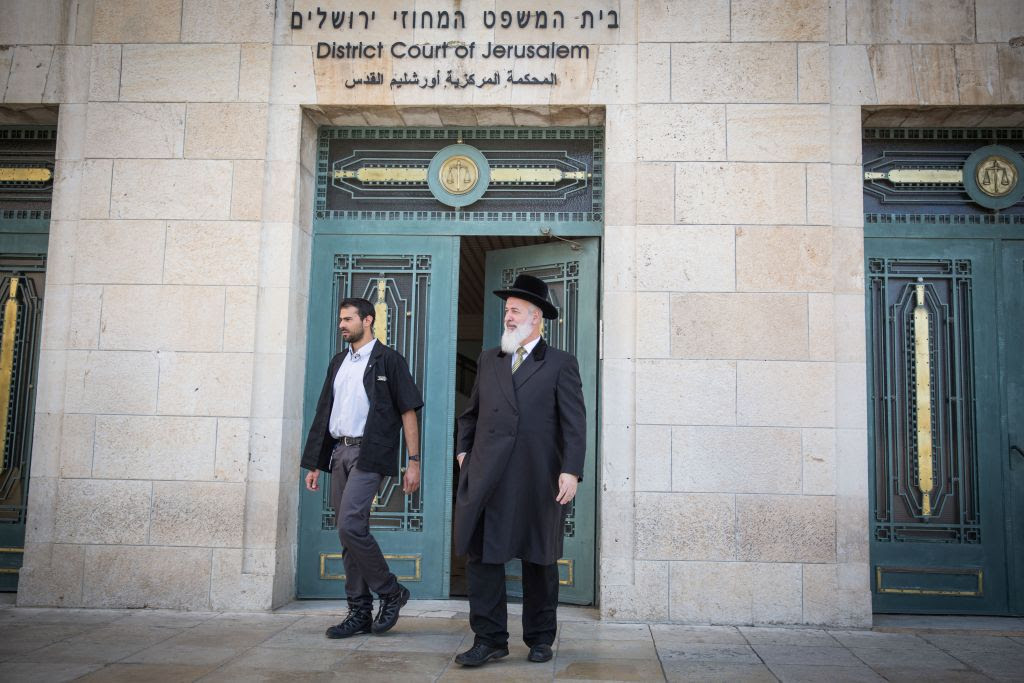 Former Chief Rabbi of Israel, Yona Metzger (r) seen at the Jerusalem District Court at the opening of his trial, where he is suspected of taking bribed, fraud, and involvement in criminal activities, on March 10, 2016.

In 2014, the Israel Police’s National Fraud Unit, also known by its internal police moniker Lahav 433, opened a months-long investigation into alleged scams linked to Metzger involving millions of shekels of funds purportedly siphoned into his accounts. The case was then handed to the Jerusalem District Attorney’s office, which examined it before passing it on to then-attorney general Yehuda Weinstein, who brought the charges against Metzger.

Police said Metzger had stashed about $200,000 with his sister in Haifa, and a search of his home turned up NIS 40,000 (over $11,300 at the time) in cash hidden in various books. At the time, Metzger contended that the money in Haifa came from an inheritance, but the investigation found this claim to be untrue.

According to the indictment, various nonprofit organizations connected with the rabbi during his term in office received millions of shekels in donations, some of which Metzger allegedly took for his personal use.

In addition to profiting from donations to charitable causes, he was also accused of taking bribes meant to sway his opinion on matters he attended to as chief rabbi.

Israel has two chief rabbis, one Ashkenazi, or of European Jewish heritage, and one Sephardi, hailing from Jewish communities of the Muslim world. Their responsibilities include running the rabbinical courts and regulating the kosher food supervision industry.Metzger was voted into the prestigious position in 2003 with the support of the senior ultra-Orthodox rabbinical authorities at the time.In 2005, he was questioned on suspicion of receiving benefits from a hotel in Jerusalem in return for favors, and police recommended he be tried for fraud and breach of trust.
But the attorney general at the time, fearing an unsuccessful prosecution, decided against indicting him. Instead, he wrote a scathing report about Metzger, accusing him of lying to police and recommending that he resign immediately.