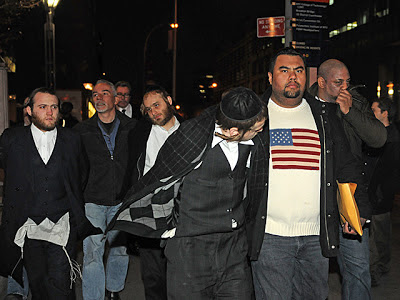 Joseph Fried, Yona Weisman and Lemon Juice were arrested Thursday evening and charged with judicial contempt, a misdemeanor, after a court officer found pictures on their phones of the alleged victim testifying in the courtroom where Weberman has been on trial. Abraham Zupnick was arrested as well but the charges against him were dropped on Friday.

Weberman, 54, the head of a Satmar sect of Orthodox Jews, is accused of repeatedly sexually assaulting the young woman starting when she was 12 years old.

Prosecutors said the men accused of taking photos made the trial even more difficult for the alleged victim, who is now 17 years old.

"There was no other reason to do this except to intimidate and dissuade this witness and other potential witnesses from testifying in this highly public rape trial," Assistant District Attorney Joseph DiBenedetto said.

But lawyers for all three men said that while their clients may have taken photos outside of the courtroom in the hallway, they did not take any pictures of the young woman while she was testifying.

"If any pictures were taken, they were taken in the hallway," said Shekera Shahid, Fried's lawyer.

The defense lawyers said the photos of the alleged victim testifying must have been taken by someone else and sent to their clients' phones. The lawyers also said no one had witnessed their clients taking photos in the courtroom, although prosecutors said court officers observed Weisman with his phone out during the trial on Wednesday.

Lawyers for Fried and Weisman declined to say who their clients supported in the trial, but Leopold Gross, Juice's lawyer, said Juice attended the trial to support the victim, not intimidate her. Gross said Juice did not know he wasn't supposed to take pictures in court, and Gross denied prosecutors' claim that Juice had posted a picture of the young woman to Twitter.

Bail was set at $5,000 bond or $2,500 cash for each of the three men, and they were expected to be released late Friday or early Saturday.

If convicted, they each face up to a year in jail.

The men appeared before a judge after sundown on Friday, during a time when Jews are not allowed to work, drive or use an elevator.

That made it more difficult for their families to be there for support, and the men will be unable to get a ride home when they are released.

"It's a huge problem," said Joseph Fried's brother, Yoel Fried. "They are going to have to walk home."

The men belong to the Satmar sect of Hasidic Jews who live in Williamsburg, approximately 2.5 to 3 miles from the court.

The case has been a lighting rod within the Brooklyn ultra-Orthodox Jewish community, which does not generally want to involve outside law enforcement.

Supporters of the young woman said she has already faced intimidation from the community in coming forward, and that the pictures may be another attempt to shame her.

"It's extremely disrespectful, especially in her community," said one 18-year-old woman on Thursday. "It's hard enough for her to stand in front of Weberman."

Her testimony continued Friday, and the court ended those proceedings at 2 p.m. because of the Sabbath.

The Brooklyn District Attorney's office would not comment on the arraignment taking place Friday night, but did say they have no control over when it happens.

A friend of the young men said he felt the proceedings were being stalled.

"It's very bad. They're doing it on purpose," the friend said. "The paperwork should be done by now. It's been 24 hours."