Jews on Trembling Knees! How can anything be extremist when the facts are staring you in the face?

How often can we bury Kahane? 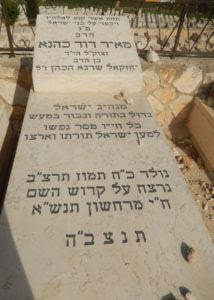 The same people who are fine with ANYBODY getting into our Congress here, their Knesset there, are horrified at what they see as the second-coming of Kahane in Israel.

(Yossi Klein Halevi, in his “Memoirs of a Jewish Extremist,” recalls a 1971 talk by Kahane in New York: The “Nice Irvings” say, “‘Violence is unJewish! The Bible says so!’ In the Bible, Kahane pointed out, “we find the story of a man named Moses who saw an Egyptian beating a Jew. And what did Moses do? Set up a committee to investigate the root causes of Egyptian anti-Semitism? The Bible says, ‘And he smote the Egyptian.’”) PM


Well, that was close. A political party that was marginally associated with Rabbi Meir Kahane has been okayed to run for a seat in the Knesset come the April Elections.

No chance at all if Kahane himself were running for a seat in US Congress where, in the House, today’s Democrats run a show that he saw coming. Yes, he did. Clearly, he did.

He’d be justified to exclaim, “Told you so.”

He’d surely be upset at young Democrats who parade on Fox News one after another and keep saying, “I can understand Ilhan Omar – and I’m Jewish.” (I am merely nauseated.)

More on that in a moment, as meanwhile back in Israel…

By a vote 16 to 15, Israel’s Central Elections Committee headed off an attempt to disqualify Otzma Yehudit and its leader, Michael Ben-Ari.

Nail-biter, and all because of Kahane, who was murdered Nov.1990 by an Arab in Manhattan…but remains a symbol of Right-Wing extremism according to Left-Wing extremists.

By which I mean that the same people who are fine with ANYBODY getting into our Congress here, their Knesset there, are horrified at the second-coming of Kahane. Amid the chaotic politicking of the moment, this has sparked the most heated exchanges, and even so-called Jewish-American leaders have called on Otzma Yehudit to be stopped.
I cannot say they are Leftists because I do not know them. But I can call them Jews on trembling knees. This, Kahane was not. Hence, the situation.

The name Kahane, in case you are new to this, causes some people to break out in a rash. Think of the Gong Show. Say the “secret word” a buzzer goes off and you get bonged.

Kahane is that secret word.

In fact, one of my readers was worried that if I went ahead with a column like this, I would get bonged.

“Just don’t use the word Kahane in the headline,” he trembled.

But there is no other word for Kahane. He came. He saw, and like Ezra returning from Babylon, he was worried that all those concessions were defiling the rejuvenated Israel.

He was a purist, He wanted to get things fixed through Torah as he saw Torah. He was a man on a mission, a man with a plan. Some other time for the details, but let’s just say that for Kahane, expulsion would never be for the Jews, only the Arabs, particularly those who screamed and committed bloody murder. So?

So, for that he was declared overly zealous, unfit for Israel and termed persona non-grata. In my innocence, however, he was just a messenger with a difference of opinion – so why the hysteria? I still don’t get it, and didn’t get it when I was in Israel and warned that in certain places it is best not to say the secret word.

Was he too uncompromising?

They say yes. I say I don’t know. But I will say this – I’d rather be on the side of the Right when they get it wrong. When the Left gets it wrong the price is too often too terrible.

Was he so wrong? Did he foresee the disastrous 1993 Oslo Accords? Seems to me he did, likewise the expulsion of Jews from Gaza in 2005, which has done Israel nothing but harm, and likewise the politics of this moment where, for the April elections, we find certain parties ready to decree more expulsions of Israelis to give up more land to the Arabs.

If to some he was prophetic, to the authorities he was a hothead, but if you ask me, he was clairvoyantly on target with his message of Aliya. Taking a page, perhaps, from Jabotinsky, who warned the Jews to vacate Europe before Europe vacates you – Kahane summoned American Jews to pack up and go.

Today’s headlines…today’s Ilhan Omar…today’s Democrat Party that needs arm-twisting to get the votes to deplore anti-Semitism…ought to justify him for his concern that evil days are coming. Like this it goes for today’s Sharia/Jihad infested Democrats – “Yes, we condemn anti-Semitism, BUT.”

They will go on to equate Islamophobia with anti-Semitism. Nice try. But six million Muslims were not murdered 75 years ago. Six Million Jews were. Where’s the symmetry?

We are not as safe was we thought even in America. Who imagined this? Kahane did.

“There you go again,” I can hear my friend saying.

Kahane’s “Dear World” was his “Howl,” written powerfully, Isaiah-style, as a warning for Jews to get their act together against a world without pity…before, once again, it’s too late.

How can anything be extremist when the facts are staring you in the face?