A Raw Deal for Chickens, as Jews "Atone for Sins"

PLEASE WATCH THE VIDEO BELOW FROM THIS YEAR'S PAGAN RITUAL DONE BY JEWS: For those of you who still cling on to the belief that this Pagan ritual we adopted from our European Neighbours during the Middle Ages is ok, then take a look at the outcome of this barbaric Act. This was taken by the wife of a friend of mine who rightfully thought that it should get as many views as possible.


A hen squirmed in Joel Lubin’s hands, but he held on and raised it over the head of his wife at noon on Thursday, as they stood on a sidewalk in the Williamsburg section of Brooklyn.

As Mr. Lubin turned the bird in three small circles over her head, his wife read from a laminated card.

In front of her was a double-wide stroller with two children on board. Behind a barricade a few feet away were about 100 plastic crates full of live chickens. It may never be a good week to be a chicken — that is a deep, deep question, beyond the remit of this column — but let us say that the first days after the Jewish New Year are a particularly bad time to be one in parts of Brooklyn.

Between Oct. 4, the end of the Rosh Hashana observance of the new year, and Yom Kippur, the day of atonement starting the night of Oct. 11, an estimated 50,000 chickens will be sacrificed in Brooklyn as part of a penitential ritual performed by some Hasidic Jews.

The practice, called kaporos or kapparot, is meant to transfer a person’s sins to the chicken. “If you’re going to die during the year, maybe the chicken will die instead,” Mr. Lubin said. The chicken he rotated over his wife’s head was brought into the Cohn Live Poultry shop on Flushing Avenue, where it was slaughtered, made kosher and packed on foam butcher trays. “It goes to the poor,” Mr. Lubin said of the chicken.

Mrs. Lubin, who declined to provide her given name, had enlisted her husband to handle the bird. “I really don’t like touching animals,” she said. “You can have someone else do it, but you say the prayer.”

To meet the demands of penitents in Brooklyn, slaughter operations are set up every year in parking lots and other open spaces, often run by congregations and other organizations to raise funds.

Last year, animal rights activists sued New York City, arguing that it was not enforcing health, sanitation and other regulations around the practice. A judge ruled that there was no clear evidence of a public nuisance. A congregation in a Detroit suburb won a case last year that allowed it to proceed with kaporos. Two similar suits are pending in Southern California.

Critics also say that the chicken ritual is tradition, not holy law, and kaporos can be carried out satisfactorily by donating money. 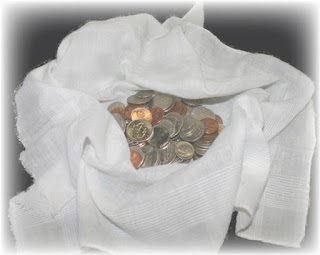 Some kaporos practitioners swing the birds overhead, gripping the wings or legs, but the people outside the Cohn store on Thursday kept a firm handle around the midsection.

Because Cohn sells live poultry year round, the business carries out the slaughter and butchering with a minimum of gore.

At a booth set up in the street, people pay $17 for a ticket marked “male” or “female” and then pick up their bird in a canopied area. Women are issued hens, and men get roosters, explained Rifki D., who did not want to give her last name.

“If you’re pregnant, you take an extra one,” she said. “For yourself you take a girl chicken, then you take a boy chicken in case that’s what you’re having.”

The chicken becomes not only a surrogate for life and death, but for less mortal matters. “There are some who might give it a light kick,” Rifki D. said. “The thinking is, if I’m going to be kicked during the year, let it be the chicken.”

Included in the lawsuit filed last year were pictures of chicken carcasses that had been disposed of in the regular city garbage, but it seems that birds typically are used for food. “We are all here for a purpose, and the chicken is here for a purpose,” said Yossi Cohn, 32, grandson of the founders of the poultry store. “We eat them.”

The early days of kaporos are dominated by women, Mr. Cohn said. The men want to wait until the last moments before Yom Kippur to carry out the ritual, hoping to clean up as many sins as possible before atonement. The store will remain open all night on Monday to accommodate those coming in the final hours. “The men have more sins,” Mr. Cohn said.

Many people purposely leave their chickens with the store, knowing that they will be given to people in need or to organizations that could use them.

So maybe not a good week to be a chicken, getting stuck with human failings. But not so bad for hungry people without money in their pockets. Just inside the door to the store, a shopping cart was filled to the brim with plastic-wrapped chicken parts. The stickers listed the price: Free. 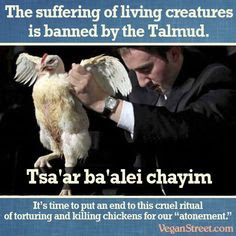 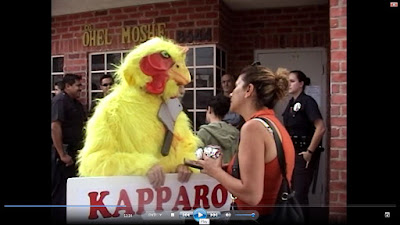 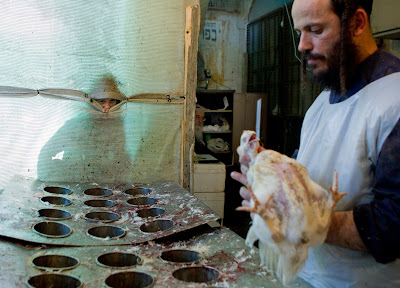 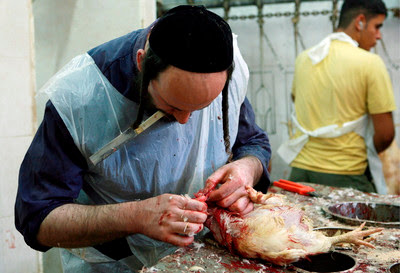 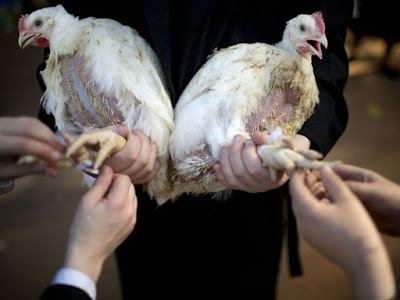 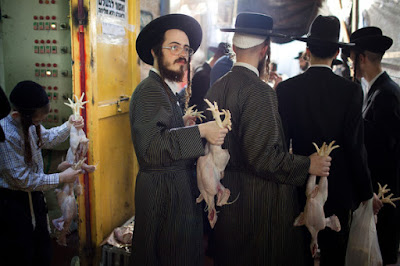