'Unfathomable' prior abuse was not known to Principal Rabbi ???

He is the second paedophile to be convicted of abusing students at Yeshivah and in both instances, evidence tendered in court suggests those in charge were given ample warning but chose to do nothing.

Cyprys' abuse of young boys began when Cyprys himself was only 14 and involved nine victims who Cyprus variously raped, molested and coerced into performing sex acts with himself and with each other.

He was convicted last month of five counts of rape and has now pleaded guilty to further charges including indecent assault and gross indecency.

Cyprys' lawyer today told the County Court he wants his client to read the victim impact statements of the boys he abused before he is psychologically assessed for sentencing.

The case has been adjourned to November 8 for a pre-sentence hearing.

Abuse made victim question his faith

One of those boys Cyprys abused is Victim M.
"It's all still so fresh and raw," M told the ABC.
"It's a feeling of relief; I feel vindicated for the public campaign.
"I do feel that this (conviction) is going to assist many victims in the Jewish community who will now see that you can get justice.

"Even though this may have happened decades ago, it's never too late."

"Even though this may have happened decades ago, it's never too late," Said Victim M

He used those roles to coerce his victims into exposing themselves to him and performing sexual acts on him and on one another under various guises, telling them the acts were punishments, martial arts training or religious.

Victim M was molested in spiritual baths connected to the school and says the experience has left an indelible mark on his faith.

"My whole belief in God has been something that I've been struggling with for decades, essentially since that time when I was abused," M said.

"So, from my perspective it has shaken myself - and many of the other victims I've been in contact with - to the core.

"They're not sure where they stand, what religion means to them."

He says that is because he and other victims were made to feel like they had done the wrong thing when they tried to report Cyprys' abuse while it was happening.

'Unfathomable' prior abuse was not known to Principal Rabbi... ? 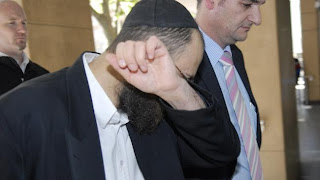 Victoria Police criticised the school for helping Kramer escape to the US.

The magistrate who committed Cyprys to stand trial described as "unfathomable" the assertion of then principal Rabbi Yitzcock Dovid Groner that he had no knowledge of the allegations at the time, despite two parents testifying they had told him Cyprys had interfered with their children.

He said compensation is "something we are seriously considering".

Yeshivah College has told the ABC it cannot comment because Principal Rabbi Smukler is on leave.

Last week, however, Australia's most senior orthodox rabbi Moshe Gutnick spoke to the ABC about a letter he sent to every synagogue in Australia, admitting the Jewry's failings in dealing with sexual abuse.

"It acknowledges a culture of cover up," he said.

"In other words, I'm not talking about any specific incident or case, I'm talking about this feeling that it should be kept in house and quiet and not shame the community, and that again was completely wrong."