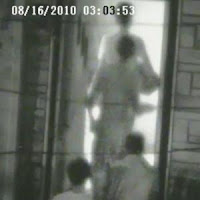 ABOVE: Goodman is caught on webcam ushering children into his home in Brooklyn!

Andrew Goodman, 27, who worked for Jewish social-service agencies, is charged with sexually abusing two Orthodox boys for years in Flatbush — one from age 11 to 15, the other from age 13 to 16.

Goodman filmed sex acts with the youngsters on a Web cam, according to the 144-count indictment, which alleges numerous violations since 2006. He has pleaded not guilty.

Andrew Goodman is one of 85 sex-abuse suspects arrested over the last three years by Project Kol Tzedek, has been accused of preying on the boys of Brooklyn’s Orthodox Jewish community and — even after his arrest on sex-assault charges — was caught on video ushering teens into his Flatbush home. He is being held on Rikers Island in lieu of a $1 million cash bail.

He’s one of an astounding 85 accused Orthodox child molesters that Brooklyn District Attorney Charles Hynes’ office says it has busted in the past three years in an initiative called Kol Tzedek, Hebrew for “voice of justice.”

The cases involve 117 victims — a number that has the community reeling from the extent of the horrors of pedophilia.

Launched amid complaints that Hynes was soft on Orthodox child predators, Kol Tzedek aims to coax victims to come forward, despite strong pressure in the insular religious community to cover up such crimes.

All but two of the suspects are men, and more than half the victims are male, said Assistant DA Rhonnie Jaus, chief of the sex abuse and crimes against children division.

Of the 38 cases closed so far, 14 perps got jail time, ranging from a month to 10-to-20 years for crimes that included sex abuse, attempted kidnapping, and sodomy, Jaus said.

The other 24 have walked free. They got probation, pleaded to minor charges, or saw their cases dismissed — often because victims or their parents backed out under community pressure.

Agudath Israel of America, a body of Torah sages, requires anyone alleging sex abuse by a fellow observant Jew to first report to its rabbis, who decide whether the case should go to secular authorities.

Goodman’s case, which Hynes’ office hasn’t publicized, shows how the community’s response has started to change. Rather than keeping it among the Orthodox, some alleged victims turned to sympathetic religious leaders and outside authorities to help lock up a menace.

“Andrew Goodman is known in our community as a lifelong molester who preys on young boys and ruins their lives,” a Talmudic scholar at Congregation Bais Torah wrote to Brooklyn Judge Martin Murphy, who is hearing the case.

“Believe in me.” And therein lies a lesson about leadership with a resonance beyond football!

"...He reminds us that strength comes in many forms and some people have what can be described only as a gift for winning, which isn’t synonymous with any spreadsheet inventory of what it supposedly takes to win.

This gift usually involves hope, confidence and a special composure, all of which keep a person in the game long enough, with enough energy and stability, so that a fickle entity known as luck might break his or her way. For Tebow that state of mind comes from his particular relationship with his chosen God and is a matter of religion. For someone else it might be understood and experienced as the power of positive thinking, and is a matter of psychology. Either way it boils down to stubborn optimism and bequeaths a spark. A swagger. An edge.

It’s easy to be pessimistic about optimism. When peddled generically by unctuous politicians, it can seem the ultimate opiate, a cop-out and fallback when there’s nothing more substantive to sustain you. But optimism can have an impact. It’s what radiates from Tebow and fires up the Broncos. And therein lies a lesson about leadership with a resonance beyond football.

After Tebow took over, the Broncos didn’t add a whole, half or even quarter roster of better players. But he told his teammates, “Believe in me.” And he must have done so with a persuasive charisma. They clearly have a renewed belief in themselves — and are performing better than before.

The Broncos are the talk of the league. More and more people are watching. And you could indeed say they’re tuning in to find out how far God can take a team. Because that’s just another way of saying how far grit can."