On Child Molestation and Calling for the Murder of Fellow Jews... 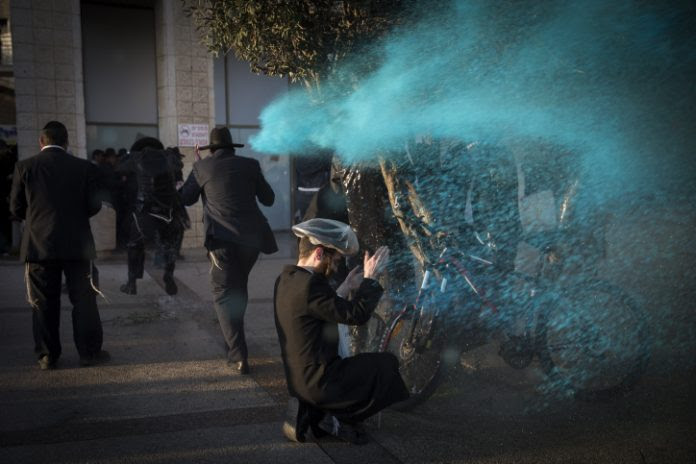 It is nothing new that certain elements among our fellow Jews want to have nothing to do with the draft into the IDF. They have found multiple ways to show their displeasure and, in doing so, to disrupt the public thoroughfares , cause severe damage to public property, inflict bodily harm on security personnel and other actions–all in the name of G-d.

A subset of this population  is a group of fringe elements, who have now gone even further, beyond any terrible actions to date. Carrying signs that declare that one must resist the draft to the point of יהרג ואל יעבור (better to choose death than to “transgress”), this group (known as the Jerusalem Faction, among others) has decided that drafting into the IDF is akin to the three sins for which one must forfeit his\her life: Idolatry, murder and immorality.

If that was “all” that they did, then, Dayenu…but wait, there’s more!

Public declarations from these individuals have been made, in the name of Jerusalem Faction leader Shmuel Auerbach, to resist enlistment “until the last drop of blood.” If that phrase sounds familiar, it should. It is nearly the very same words used by our mortal enemies, Hamas, the PA, etc. They,too, call for defending Al Aksa “until the last drop of blood.” So, apparently, this whole draft issue is worth bloodshed OF FELLOW JEWS!

And if that was “all” they did, Dayenu…but wait, there’s more!

Leaflets calling for the death of Maj. Yaakov Roshi were strewn outside of his parents’ house in Petach Tikva, representing an escalation in the campaign of harassment and intimidation against haredi soldiers and their recruiters, the Behadrei Haredim Hebrew news site reported.

These leaflets were left outside of the house with the phrase, “G-d will break the arm of the wicked,” and calling Roshi and his colleagues “hunters of souls.”

“Therefore, the great Torah scholars instructed that one should do the same as our forefathers did when a wicked person rose up against them, to cry to the Creator of the world that He should spare and comfort us and remove sins from the earth,” the letter continued.

“And in all places, they will pray that the memory of his name will be in disgrace, Yaakov Menachem Ben Naomi, and they will say about him what is written in Psalms, Chapters 10 and 109, about the loss of the wicked, and the Lord will hear our prayers and save us from the wicked Yaakov Roshi, may his name and memory be blotted out,” the letter concluded.

The prayer that an individual’s name and memory be blotted out is reserved by normative religious Jews for perpetrators of genocide against the Jewish people, such as Haman and Hitler. According to BeHadrei Haredim, a haredi news site, the prayer for the death of a fellow Jew crossed a new red line and showed that “anything goes” in the fight against enlistment. (Arutz-7)

And if that was “all” that there was to report, then, Dayenu. But wait…yes, sadly, there is much more!

On Monday, thanks to an ongoing undercover investigation, the Israel Police arrested more than 20 Jewish ultra-Orthodox men as suspected sex offenders whose alleged crimes were known to their insular communities but concealed from the authorities.

The twenty-two men, aged 20 to 60 and from communities in Jerusalem, Bnei Brak, Beit Shemesh and  Beitar Ilit, allegedly committed sex crimes against women, youths and children from their communities over the past two years, police said. (Ynet)

Another horrific case of a community protecting pedophiles, rapists and those who prey on women and children. Once again, the police expose communities with a mindset that one must sweep under the rug all the dirty little secrets; a mindset that protects the vermin of society, while prolonging the agony and pain of the victims.

And this is the part where some of my readers begin to chant: “Haredi basher!” And I say to all who declare that: GET YOUR HEADS OUT OF THE SAND! I don’t care if the ones saying these things and doing these things are Dati LeUmi, Reform, Conservative or have nose rings and belly button piercings: CALLING FOR THE MURDER OF FELLOW JEWS AND ENCOURAGING THE ENDANGERMENT OF WOMEN AND CHILDREN crosses every single red line that Judaism stands for.

No, these are not the acts of “Haredim.” These are acts of the lowest stratum of society. If I am bashing anyone, it is the leaders who say nothing; who protect the abusers; who encourage their followers to murder (yes, MURDER Jews). I am bashing every one of those who carry signs that going into the IDF is an issue of יהרג ואל יעבור.  To say that the actions of these people reflects all of Haredi society is merely a statement of ignorance.

Why do we accept this? Why do we not have massive counter-demonstrations against such horrific behavior? Why do we allow our Judaism to be hijacked by hooligans, miscreants, misfits and ne’er-do-wells?
Posted by Paul Mendlowitz at Thursday, March 30, 2017 2 comments: