Any rabbi with any integrity at all would consider this scenario happening all through the Modern Orthodox world. " Wow....I can date a shiksa for years, then find a rabbi to convert her if my parents want her to, eat non-kosher, violate the Shabbos repeatedly, still call myself Orthodox if my father has money, and not one rabbi stands up and says this is a fraud not to be emulated" Shameful! 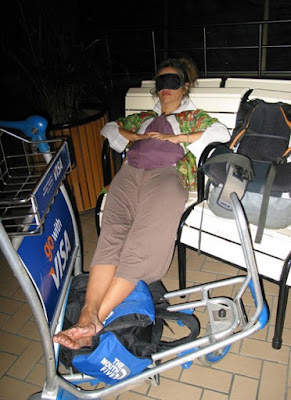 13. One should be careful not to leave on a trip on Erev Shabbos after mid-day13.

A plane or ship arriving late on Friday

20. When an airplane arrives late on Friday, after Shabbos has started, and the airport is located outside of the techum Shabbos limitations of the city, the traveler is permitted to exit the airplane, but he must remain at the airport for the duration of Shabbos. He is permitted to walk around anywhere in the terminal.

If however the airport is located within the city limits, the traveler would be permitted to walk to his destination during Shabbos.

The above ruling also applies to a situation in which the traveler has boarded the airplane early enough to arrive at his destination before Shabbos, but due to unexpected delays the airplane does not take off until after Shabbos had started. Since the doors have been already closed (and the plane was on the runway awaiting takeoff clearance) the staff does not allow him to leave the airplane and he was forced to fly and land on Shabbos.

In practice, it appears righteousness and accountability are not basic tenets of Orthodox or even Modern Orthodox culture. Whether or not the right-leaning OU — which also grievously enabled and elevated serial abuser Baruch Lanner as a dynamo for Jewish continuity — qualifies as part of the Modern Orthodox community, little has been done to avert subsequent or future abuses. As the executive who was supposed to reform that organization was being pushed out, one of the OU’s leaders unapologetically declared, “The post-Lanner era is over.” Or, as Kushner’s father-in-law would say, it was time “to move on.”

As an example of Modern Orthodoxy’s pervasive and permissive environment, it happens that Frisch itself had for years employed and touted Lanner as a teacher and administrator.

Given his unexceptional high school record, Kushner’s acceptance by Harvard highlights another iron-clad reality: the power of money, in Jewish as well as secular American life. With the understandable need to recruit and retain major donors to underwrite our economically unsustainable network of institutions, especially yeshivas and day schools, compromises are both inevitable and ubiquitous.....