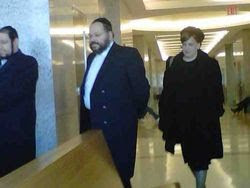 At 10:15 on Friday morning, Nechemya Weberman was seen before the judge in the Kings County Supreme Court for what promises to be a long trial involving his alleged rape and sexual assault of a 12 year old girl for three years as she was seeing him as a therapy patient. Weberman was arrested in connection with this on February 23rd and is currently out on $15,000 bail.

Weberman’s lawyer, a slick looking man in an expensive suit, turned down Judge Patricia Dimangos’ offer of five years imprisonment and maintained a pleading of not guilty. The court scheduled to meet again on Wednesday, May 11th for the next step in the proceedings. The trial itself has not been yet set. These proceedings can drag out for months or years, often wearing the victim and her supporters thin.

The defendant is a 53 year old married, unlicensed therapist from the sequestered community of Williamsburg, New York, where almost everyone is Chasidic. The courtroom was filled with Hasidim, most of whom were there to support the victim. Weberman’s wife, son, and two sisters sat in the back corner, avoiding the glances of curious audience members.

“I didn’t know about it until last year,” said the victim’s mother, R, in a distraught voice. “By that point he had messed up some of my other kids too. We were seeing him as a family therapist.”

The victim is currently 16 years old and has been to another therapist since she left Weberman a year ago. It was this therapist who discovered the alleged actions of Weberman and informed her parents.

Weberman was ordered to stay away from the victim for the coming six weeks and to refrain from any contact with her.

The defense attorney made one motion. The police department had searched Weberman’s house recently with a warrant to look for photographs pertaining to the case. The warrant had called for no opening of closets and drawers but apparently the police had ignored that clause. It was determined that any materials found under this warrant was not admissible to the court.

The prospect of a court case for a member of the Chasidic clan, especially a case as covering the taboo topic of sexual assault, is nearly unheard of and highly rare.

The progress of the community in recent years in accepting that this could happen and should be spoken about, has been colossal.

When asked whether the community was supportive of her case and her daughter’s situation, Rachel replied emphatically, “Yes!”

Online forums have been abuzz with this story ever since Weberman was first arrested. Some comments are by others claiming to be molested by this man, while others say such things as “a Hasidic holy rabbi would never commit this crime. You are all anti-Semitic!”

The fact that another hearing was taking place 11 floors below this case in the same building at the same time, involving another Chasid from Williamsburg who allegedly raped a young boy in a mikvah is a mark of just how far the community has come. The defendant in that case, Meir Dascalowitz, a 27 year old, has been out on bail for ten months now, claiming to need psychiatric evaluation for mental instability. His hearing was postponed yet again today, as his lawyer maintained that the psychiatrist who saw Dascalowitz was not fit to assess him as the therapist speaks only English and no Yiddish.

On March 8 a Grand Jury indictment was entered into the court record. Weberman was charged with 150 felonies all involving sexual crimes with a child, including one B felony in the first degree, 145 D felonies and 4 E felonies. Among other things he was specifically charged with the B felony in the 1st degree, of “a course of sexual conduct” with his victim when she was twelve where the act had to have been either oral, anal, or vaginal sex, or penetrating her vaginally or anally with a foreign object which caused injury. A defendant in a similar case was only convicted of eight D felonies and was sentenced to 10-32 years. In theory, Weberman’s sentence, if he is convicted on all charges, could top Bernie Madoff’s by several hundred years.

Before Weberman entered the courtroom this morning, a 30 year old former Chasid, now bedecked in jeans, chains, eye makeup, black nail polish, and long black hair went over to him. He held up a picture of a young boy.

“Do you remember molesting me?” He demanded. “Do you?”*

Five noted activists (among 50) who came to court to support the victims of sex-abuse: 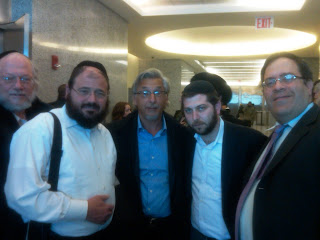