Really, Rabbi Perlow - Head Of Agudath Israel - Don't you get it? 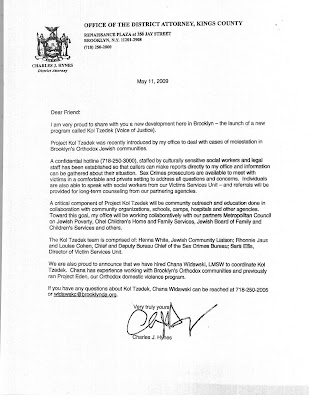 Permit a small man to speak a word in the ears of my lord, and let my lord not be angry with his servant, for you are great.

"First, however, he reminded his listeners that what makes Agudas Yisroel special is that “it seeks the truth of Torah” and discerns it in the understanding of Gedolei Torah. That determination to divine what is proper for Klal Yisroel “resists even well-meaning daas baalei batim,” Rabbi Perlow proclaimed, and certainly “the bloggers and the picketers, presumptuous promoters” of the notion that “they know better what is good for the Jews.”

Really, Rabbi Perlow. Don't you get it?

You're publicly acknowledging a burning fire in your community, a chillul Hashem of epic proportions, allowed to continue by...the Agudah and its leaders. If not for UOJ, a big, bad blogger, who singlehandedly raised and fought this issue into the consciousness of the charedi public, you would never have discussed it. It would have remained, as it was for 50 years, our dirty little secret. So, kol Hakavod to UOJ and all of us bloggers and readers, who have forced this unto the front pages, to finally be discussed and dealt with once and for all. But, knowing the Agudah, it won't be.

Amazingly, by virtue of your discussing this crisis at an Agudah dinner, UOJ has won. We have all won. The Agudah lost.

Don't you see that, too? You tried to keep it quiet, off the front pages. We wouldn't let you. So now you discuss it as the very first topic at your dinner. And bloggers shouldn't take credit? Then who should? The Agudah? After silencing students and parents for 50 years?

“Individuals have been hurt and deserve redress, acknowledgment and empathy.” There is a need, the Rosh Agudas Yisroel continued, “for tikkun ha’ovar” - correcting the past - and for addressing the future, “creating means to guide against wrongdoing to children.”

What does this mean? Are you agreeing you made serious mistakes for 50 years? You need to "correct the past"? Really? Why? Everything you've ever done has been Daas Torah, right? So how, where, did you go wrong? If you blew it, SAY SO: loudly and clearly: "We blew it, big time. Had no idea what we were doing. Always did the wrong thing, made the wrong decisions, for 50 years. Uhh, very sorry." That would be a step in the right direction.

"Not many people, Rabbi Perlow noted, know of the countless hours spent by the Moetzes Gedolei HaTorah of Agudas Yisroel and the Vaad Roshei Yeshiva of Torah Umesorah over the past two years discussing the many complex facets, including the implications “for mosdos haTorah.”

“ 'No one really knows the sensitivity that went into this entire process,” over the course of many meetings regarding “this painful parsha.' ”

That's the problem. We never elected you. You feel no need to communicate with American Jewry. There's no transparency. We have no idea if you're continuing to ignore the crisis---as you did for so long---or if you're trying to fix it. So we're supposed to believe you're attempting to fix it. But there's no evidence of any attempt to fix it, so what should people believe? That nothing is going on, that's what. But nice to hear that hours were spent trying to...fix it. Can you please show us the fruit of those meetings, other than climbing into bed with the Catholics?

"He called his listeners to carefully read and comprehend the joint statement that was issued several weeks ago by Agudas Yisroel and Torah Umesorah, reflecting the conclusion of the rabbonim at their helms. “ 'It was carefully drafted,” he averred, “and is not to be misread or treated cavalierly.' ”

Noone is reading it cavalierly, we just don't agree with it. You were wrong in the past---you just admitted it---and you're wrong now. That's ok. It's not a sin to be wrong. Just listen to baaleibatim who know more than you and try to lead.

"That statement made clear that the signatory organizations fully acknowledge the horror of abuse, “the devastating long-term scars it all too often creates,” and the fact that “'for too long many victims have suffered alone.'"

No! Are you kidding? Rabbi Shafran once called these incidents "tawdry tales"! Who could believe these children? Agudah rabbis never did. NOW you admit that long term scars result? Really? Who told you? Why believe him?