Two Herens cows fight during the annual “Battle of the Queens” cow fight finals in Aproz, on May 11, 2014. Cow = “vache” in French, “vaca” in Spanish; “vaccination” begins with “vac.” Coincidence? No!
The case is a Connecticut trial court case, Archer v. Cassel (2015 WL 1500447), decided March 10; the court views the mother’s refusal to vaccinate as a strike against her, though it also seems to view it as part of broader evidence that the mother would use any tool to spite the father:


[T]he court does not question [Mother]‘s religion, moral convictions or the sincerity of her [anti-vaccination religious] beliefs. The court is focused instead on the best interest of the children and which parent is best suited to make health decisions for them. There is no need for the court to assert its authority when a parent can act in the best interests of their children….
[The court then applied the “best interests” criteria set forth in Connecticut General Statutes Section 46b–56(c), and reasoned, in relevant part: -EV] …
The court believes [Father]‘s testimony that he did not know [Mother]‘s religious views on vaccination until after their first pregnancy. The vaccination issue that is now so important to [Mother] did not prevent her from having a second child with [Father]. The court concludes that both parents adequately understand the children’s needs, but [Mother] is willing to use them and the events of their lives to controvert and thwart their father. This may meet her needs, but not those of the children….
The court found portions of [Mother]‘s testimony confusing at best. As the case progressed, however, she re-stated and conformed her assertions to fit case law she thought supported her aims. Such “fluidity” is notable. [Mother] threatened the father of her other children with legal action if he cooperated with the [lawyer appointed to represent the children] in this case. The current dispute may well be the product of her hatred of the [Father]. The court finds that [Mother] will not hesitate to involve the children in her ongoing conflict with their father….
The U.S. Supreme Court stated that “parents may be free to become martyrs themselves. But it does not follow they are free, in identical circumstances, to make martyrs of their children.” The Court also stated that the “right to practice religion freely does not include liberty to expose the community or the child to communicable disease or the latter to ill health or death.” …
This court’s decision is grounded in its view of the judgment each parent would apply to the events of their daughters’ lives. When [Mother]‘s beliefs conflict with those of her co-equal guardian [Father], … [the] advice of the children’s doctors[,] and [the] recommendation of the [lawyer appointed to represent the children], the court must question whether she has completely thought through the developmental needs of her children as they relate to their adjustments at school and the community or if this is yet another issue on which to controvert and thwart [Father].
The court concludes on the basis of 46b–56 and its guiding criteria that [Father]‘s judgment in health-related decisions is in the best interests of his daughters….
The court grants [Father]‘s Motion for Order … to the extent that if a non-emergency question or choice arises about either child’s health and after a good-faith discussion of the options between the parties, the parents cannot agree, … [Father] shall have and exercise final decision-making authority in matters of his daughters’ health.

Note that Connecticut law provides for a religious exemption from vaccination requirements, stating, “Each local or regional school board of education … shall require each child to be protected by adequate immunization against [diseases] … before being permitted to enroll in any program operated by a public or non-public school under its jurisdiction … Any such child who … presents a statement from the parents or guardian of such child that such immunization would be contrary to the religious beliefs of such child … shall be exempt from the appropriate provisions of this section.” As the court points out, it’s hard to know what the “religious beliefs of [a four-year-old] child” might be, but even if one assumes that they follow the parents’ religious beliefs, “Connecticut law is silent when the parents disagree.”
For other cases on the subject, see here and here. 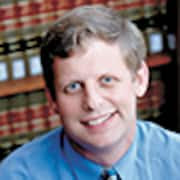