A Bad Call on Risky Circumcisions - a circumciser, or mohel, sucks blood from a newly cut penis with his mouth - The board should say no and take a stand for basic hygiene and common sense.... 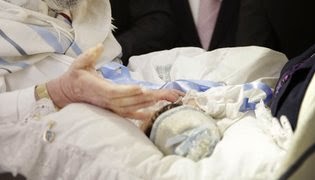 By THE EDITORIAL BOARD - NYT

The herpes simplex virus, common and relatively harmless in adults, can be deadly to babies. Such infections in newborns are blessedly rare, but one thing is known to increase the risk significantly: the circumcision ritual called metzitzah b’peh, practiced by many ultra-Orthodox and some Orthodox Jews, in which a circumciser, or mohel, sucks blood from a newly cut penis with his mouth.

The New York City Health Department, American Academy of Pediatrics, Centers for Disease Control and Prevention and other authorities have long warned about the dangersof the practice. The Health Department has linked it to more than 12 herpes cases, and two deaths, since 2000, and has tried to get mohels to stop doing it.That is why it is distressing to see Mayor Bill de Blasio and Orthodox leaders celebrating a deal they made this week to abandon the city’s modest effort to regulate the practice, and instead leave it to the ultra-Orthodox community to help limit the damage metzitzah b’peh does — but voluntarily, and only after babies get sick, not before.

They refused to use the forms and sued the city.And so Mr. de Blasio, who has pleased the potent Orthodox voting bloc by ridiculing the policy as unenforceable while making no visible effort to enforce it, has decided simply to let the mohels do their thing, until a baby gets sick.

The plan then is to do a series of DNA tests; if the baby’s mohel has the same herpes strain as the infected baby, he will be forbidden to do circumcisions.The plan needs Board of Health approval.

The board should say no and take a stand for basic hygiene and common sense.

Otherwise, this will be a city that requires tattoo artists to take infection-control courses and use sterile tools but tolerates an amateur surgery in which infection is fought with no more than perhaps a swig of Listerine.The administration says it will ask hospitals and doctors to distribute information about the risks of metzitzah b’peh, which should include accurate descriptions, including photographs, of the lesions and brain injuries suffered by babies whose safety their rabbis — and mayor — have allowed to be jeopardized.
http://www.nytimes.com/2015/02/28/opinion/a-bad-call-on-risky-circumcisions.html?emc=edit_tnt_20150227&nlid=32999454&tntemail0=y
Posted by Paul Mendlowitz at Sunday, March 01, 2015