The Three Weeks Of Mourning Begins!

Dr. Asher Lipner is going to be a guest on the Dov Hikind radio show this Motzei Shabbos, July 26, 2008, to talk about sexual abuse in the Orthodox Jewish community. It airs at 11:00 (Saturday evening) - on WMCA 570 AM - New York.

Child sexual abuse is a form of child abuse in which a child is abused for the sexual gratification of an adult or older adolescent.[1][2] In addition to direct sexual contact, child sexual abuse also occurs when an adult exposes their genitals to a child, asks or pressures a child to engage in sexual activities, displays pornography to a child, or uses a child to produce child pornography.[3][1][4]

Effects of child sexual abuse include depression,[5] post-traumatic stress disorder,[6] anxiety,[7] propensity to re-victimization in adulthood,[8] and physical injury to the child, among other problems.[9] Sexual abuse by a family member is a form of incest, and can result in more serious and long-term psychological trauma, especially in the case of parental incest.[10]

Approximately 20% to 25% of women and 5% to 15% of men were sexually abused when they were children.[11][12][13][14][15] Most sexual abuse offenders are acquainted with their victims; approximately 30% are relatives of the child, most often fathers, uncles or cousins; around 60% are other acquaintances such as friends of the family, babysitters, or neighbors; strangers are the offenders in approximately 10% of child sexual abuse cases. Most child sexual abuse is committed by men; women commit approximately 14% of offenses reported against boys and 6% of offenses reported against girls.[11] Most offenders who abuse pre-pubescent children are pedophiles,[16][17] however a small percentage do not meet the diagnostic criteria for pedophilia.[18]

Sex Abuse by Teachers Worse Than by Priests

WASHINGTON – More than 4.5 million children are forced to endure sexual misconduct by school employees, from inappropriate comments to physical abuse, according to an exhaustive review of research that reads like a parent's worst nightmare.

The best estimate is that almost one in 10 children, sometime between kindergarten and 12th grade, are targets of behavior ranging from unprofessional to criminal, says the report for Congress by Charol Shakeshaft, a professor at Hofstra University's School of Education.

"Most people just don't think this can really happen," said Shakeshaft, hired by the Education Department to study the prevalence of sexual abuse in schools. "We imagine that all teachers are like most teachers, in that they've gone into teaching to help children. Most do, but not all. We need to acknowledge that's the case and do something to stop it."

The report, required under the No Child Left Behind law and delivered to Congress on Wednesday, is the first to analyze the field of research about sexual misconduct at school.

Some educators immediately took issue with its approach, mainly the combining of sexual abuse with other behavior, such as gestures or notes, into one broad misconduct category.

But another prominent researcher supported the findings, suggesting, as Shakeshaft did, that they might even understate the problem. American Association of University Women, whose surveys of pupils were at the core of the new report, stood by its research.

There have been no nationally financed studies to collect data about how common sexual misconduct is in school, one of many areas Shakeshaft suggests must be addressed. Her analysis covered almost 900 documents and reviews that have dealt with the topic in some way, from private research and newspaper stories to reports for government agencies.

What she found portrays a problem that, no matter how uncommon, united groups of teachers, superintendents, parents and education leaders in concern and disgust.

The report describes schools as places where abusers come to prey, targeting vulnerable and marginal pupils who are afraid to complain or unlikely to be believed if they did.

It describes adults who trap, lie, and isolate children, making them subject to unwanted behavior in hallways, offices, buses or even right in front of other pupils in class. And the offenders work hard to keep children from telling, threatening to fail or humiliate them.

The report found teachers were the most common offenders, followed by coaches, substitute teachers, bus drivers and teacher aides. Among students, 56 percent of those targeted are girls, and 44 percent are boys, a smaller gap than commonly expected, Shakeshaft said.

Robert Shoop, a Kansas State University professor of education law and expert on sexual exploitation in schools, said the estimate of one in 10 children affected was not high. The actual number might be larger, he said, because of historical underreporting of the problem.

"Children need to be very clearly educated about inappropriate behaviors, and teachers do too, so when children see the earliest signs of this behavior, they have someone to tell," Shoop said. "But often, parents say, 'Mind your teacher.' So it's very unlikely that this 10-year-old kid is going to rip the teacher's hands off and say, 'Back off.'"

Describe what you see and how you feel in light of the continued destruction of the precepts of the Torah, in spirit and in deed! 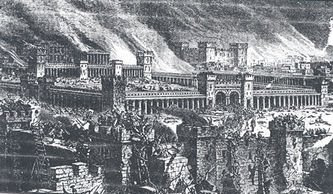