She is also the first woman, and the first openly transgender woman, to have been ordained by an Orthodox institution, having received her rabbinical degree in 2011 from the Viznitz Yeshiva in Kiamesha Lake in the Catskills... 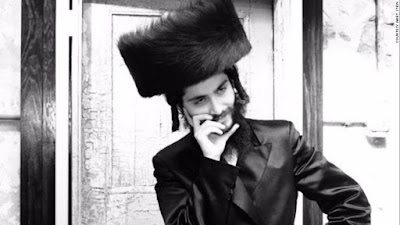 Ex-hassidic transgender Rabbi Abby Stein on LGBT: You are not alone

The transgender descendant of the Baal Shem Tov describes her journey from Williamsburg, NY to becoming the woman she is today.

In 2015, Stein founded the first support group for transgender people of Orthodox background. She is also the first woman, and the first openly transgender woman, to have been ordained by an Orthodox institution, having received her rabbinical degree in 2011 from the Viznitz Yeshiva in Kiamesha Lake in the Catskills.

Since coming out as transgender a year after receiving ordination and subsequently leaving the hassidic world – sometimes referred to in Jewish communities as going “off the derech” – Stein has given more than 150 lectures on her experience to audiences across the United States and Israel.

Since quitting her community in 2012, Stein has had minimal contact with her family in Williamsburg, most of whom have shunned her. She currently splits her time studying political science and gender studies at Columbia University in Manhattan, and working as an educator, speaker and activist for transgender issues.

Following her Tel Aviv talk, Stein spoke to The Jerusalem Post about her time here, which has included 10 days studying with other rabbis at Jerusalem’s Shalom Hartman Institute.

“It’s been interesting,” she said about the religious atmosphere she has encountered in Jerusalem.

“It’s still hard for me sometimes to just look on from the outside.”

Stein visited Mea She’arim, where her father and grandparents grew up, and visited her great grandfather’s synagogue. “I definitely don’t feel like I’m part of that community anymore, and they obviously don’t see me as such.”

Despite being excommunicated from her family and community, Stein said Israel is an important place to her as a Jew. “It’s something personal. And that is a big part of the reason why so much of what’s going on here, the problems, bother me so much more.”

Stein hails from an illustrious lineage of hassidic rebbes, or “spiritual supreme leaders.” She is descended from the Baal Shem Tov (1698-1760), and his son Rabbi Tzvi Hirsh Isserles of Pinsk (c.1729-c.1779). Her ancestors “succeeded beyond their own expectations,” she said.

From a young age, Stein said she always knew she felt like a girl, and didn’t know that being ‘transgender’ existed. She only learned of the term when she secretly used the Internet for the first time at age 20 in a public library to Google search “How does a boy become a girl?”

For Stein and others, this meant having no contact with those of the opposite sex apart from family. She was ordained as a rabbi by 18, married at 19, and had her first child at 20. It was shortly afterwards, in 2015, that she began her transition into becoming a woman.

“If they started hating us, that’d mean recognizing we exist,” she said, joking that her goal is to get the hassidim to hate LGBT individuals.

In her lecture, Stein reviewed the array of Rabbinic literature discussing gender. The Mishnah defines six sex identities, as does the Shulhan Aruch, which permits cross-dressing on Purim because it is for the purpose of simcha (gaiety), she noted.

Stein said after coming out as transgender, she shared some of these texts with her father, who still won’t accept her. But Stein is determined to prove that Judaism and LGBT can go hand in hand.

ORTHODOX MENTAL HEALTH ISSUES NOT BEING MET:Both the chasidic and ultra-Orthodox segments of Orthodox Jewry remain particularly underserved, while the age group that needs the most attention includes children and adolescents. Eighty-five percent of responding clinicians identified the ultra-Orthodox as underserved in 1984, and 48 did so in 2009. Seventy-two percent of respondents in 1984 said chasidim were underserved, while 58 did so in 2009. READ MORE:
https://jewishweek.timesofisrael.com/orthodox-mental-health-needs-not-being-met-study/
Posted by Paul Mendlowitz at Tuesday, July 24, 2018 1 comment: