Yisroel Belsky Desperate To Keep His Job at the OU And Yeshiva Torah Vodaath - Throws Kolko Under the Bus! 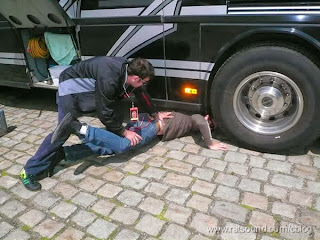 The members of Lakewood’s Orthodox community made the concerted effort to persuade Yosef Kolko to plead guilty to child molestation against his will to spare the community the unwanted publicity of a trial, defense attorneys Stephanie Forbes and Alan L. Zegas said in a brief filed in state Superior Court.

The pressure included a meeting at the home of a rabbi during which Kolko was shown YouTube videos of how child molesters are treated in prison, according to the court papers.

It also included a 2 a.m. visit by five people to Kolko’s home on the day his trial was to resume, in an effort to convince him to stop the proceeding by pleading guilty, the papers said.

Exhausted, Kolko gave in and admitted his guilt that day, May 13, but told his brother just beforehand that he was pleading guilty against his will, according to a certification submitted to the court by Kolko.

The claims will be the subject of a hearing today on Kolko’s motion to withdraw his guilty plea on the basis that he made it while under duress.

Senior Assistant Ocean County Prosecutor Laura Pierro said in a response to the brief filed by the defense attorneys that Kolko already had been contemplating a guilty plea, because of the way the trial was going. He went ahead with the plea after learning that the Prosecutor’s Office had been contacted by an attorney representing two more individuals who claimed to have been molested by him, Pierro said in her brief opposing Kolko’s motion. Kolko did not enter his guilty plea until after he consulted with a Brooklyn rabbi, Yisroel Belsky, to get his blessing, Pierro added.


Kolko, 39, of Lakewood, could face up to 40 years in prison for the offenses, although Hodgson said he would consider sentencing him to no more than 15 years in prison.

Kolko pleaded guilty while his trial was under way, after the victim, his father and a therapist already had testified.

Kolko was the victim’s camp counselor at Yachad, a summer camp that is run by the Yeshiva Bais Hatora School on Swarthmore Avenue in Lakewood. He also was a teacher at Yeshiva Orchos Chaim in Lakewood.

The case highlighted how some in the Orthodox community turned against the victim and his family in an effort to get them to have religious authorities handle the allegations rather than the police. In fact, one man was charged with witness tampering for allegedly embarking on a telephone campaign to get the family to drop the charges. The family was ostracized for going forward with the prosecution and has since moved out of state, according to Pierro.

Kolko also was the target of a campaign to pressure him into admitting guilt, according to the papers filed by his attorneys.

Kolko said one man called him to several meetings, some in front of Belsky, to urge him to agree to a plea bargain, according to the brief filed by Forbes and Zegas. The man also called Kolko to the home of a Lakewood rabbi, where he showed him YouTube videos of “how inmates kill people in jail for being molesters in order to pressure me into taking a plea and avoid trial,’’ Kolko’s certification said.

Kolko claimed in his certification that another rabbi spoke to one of his defense witnesses, telling him he should take a plea bargain, and that a parent of a former student called him when jury selection for the trial was under way, urging the same thing.

Five members of the Lakewood Orthodox community “came to my home at 2 a.m. the morning of my plea and pressured me to stop the trial by pleading guilty,” Kolko said in his certification, in which he maintains his innocence. “I arrived at court exhausted from the events earlier that morning and told my brother, Shabsi Kolko, that I was pleading guilty against my will.”

Five letters from members of the Orthodox community were submitted with the brief on Kolko’s behalf, saying that Kolko was pressured into taking a plea bargain. The letters included one from Shabsi Kolko supporting the defendant’s story that he told him he was pleading guilty against his will, and one from Belsky, who said he was among the people who advised Kolko to plead guilty.

“The reasons were convincing enough to make those who believed in his innocence fearful of the sensationalism attached to the affair and other weighty considerations,’’ Belsky wrote in his handwritten letter.

Hodgson is scheduled to hold a hearing on Kolko’s motion at 1:30 p.m. today.
Page
Previous
Next
Kathleen Hopkins: Khopkins@
njpressmedia.com