To Replace Bin Laden on Most Wanted List, a Teacher in a Pornography Case! 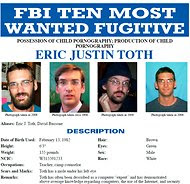 Eric J. Toth, a teacher from the Washington area, was added to the F.B.I. list on Tuesday.

Mr. Toth, the fugitive added to the list on Tuesday, was arrested in 2008 after child pornography images were found on a camera in his possession. He disappeared shortly thereafter.

Mr. Toth, 30, attended Cornell for a year before transferring to Purdue University, where he graduated with an education degree. He “has often been described as a computer ‘expert’ and has demonstrated above-average knowledge regarding computers, the Internet, and security awareness,” according to information released by the F.B.I. on Tuesday.

The F.B.I. said that Mr. Toth “possesses an education background conducive to gaining employment in fields having a connection to children” and that he might advertise himself as a tutor. Since 2008, he is believed to have traveled to Virginia, Illinois, Indiana, Wisconsin, Minnesota and Arizona.

The authorities believe they have a good chance of catching Mr. Toth because he has distinctive features. “He has a mole under one of his eyes. He is tall and lanky,” Mr. Perkins said. “He is the type of person that I hope, with a little exposure from being on the Top 10 list, will lead to individuals calling in, saying, ‘That guy works in a day care center,’ or is a teaching assistant or works down the street.”

Osama bin Laden, his predecessor on the list, was pictured with other fugitives in October 2001.

The choice is more complicated than simply finding a violent criminal who has committed a high-profile crime. In recent years, bureau officials have also tried to select other dangerous fugitives who may have been hiding in plain sight but could be recognized by the public because they have distinctive physical features.

On Tuesday, the F.B.I. finally filled bin Laden’s place on the list, adding Eric J. Toth, a schoolteacher from the Washington area accused of possessing child pornography. It was the first time since 2009 that the F.B.I. had added a fugitive to the list.

“We have had a couple of vacancies on the list that we’ve been trying to fill,” said Kevin L. Perkins, the F.B.I.’s acting executive director for criminal and cyber operations, referring to the spots left by bin Laden and the Boston crime boss James (Whitey) Bulger, who was arrested last June.

In fact, just last month, officials were preparing to ask the bureau’s director for approval to choose a fugitive accused of killing three police officers in Puerto Rico. But then that person was caught.

Using most-wanted posters to enlist the public’s help in catching criminals dates to the early part of J. Edgar Hoover’s tenure as the head of the F.B.I. in the early 1930s, when the face of the notorious bank robber John Dillinger was on a “public enemies list.”

In 1950, the bureau began using the list of 10 Most Wanted Fugitives. The first, Thomas Holden, was accused of killing his wife and two brothers-in-law. A little more than a year later, he was caught and ultimately sent to prison on Alcatraz Island in San Francisco.

Since then, the F.B.I. has caught 464 of 494 fugitives on the list. Some have been captured quickly: Billie Austin Bryant, wanted for the murder of two F.B.I. agents, was apprehended in 1969 just two hours after being added. A suspect in an armed robbery, Victor Manuel Gerena, has evaded authorities since 1983.

“It’s a big country, and you can easily hide if you are a fugitive,” said Thomas W. Repetto, the author of several books on crime and policing. “But when you get on the list, you are pretty close to getting caught. Sometimes it takes time, but if you are a fleeing criminal it is not a good place to be.”

The types of “most-wanted” criminals have also changed. Instead of highlighting just the most violent and high-profile criminals, “every once in a while we break the mold,” Mr. Perkins said, referring to the choice of physically distinctive fugitives.

That said, six of the fugitives on the current list are accused of murder.....