Libertywept.org - It's always been about the truth!

This post will stay at the top for one week; newer posts will appear just below this one! 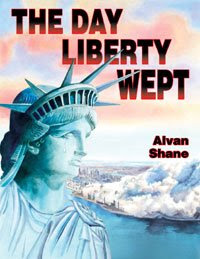 You know, I've devoted a lot of time to the the tragic crime of child sex-abuse in the Jewish community, and focused on the criminal and corrupt leadership who chose, and still choose, to bury these crimes under some God-forsaken religious doctrine called "daas Torah" -- nonsense that they invented to keep the truth from emerging on very serious topics, and to protect their criminal activities!

Well, another cause has presented itself to me, one affecting not only the Jewish community, but the entire country and perhaps the well-being of civilization itself.

I know and love the above author Alvan Shane as a brother, I trust his judgment and intellect, and I am proud to present to the world his new book. He never wrote a book before, but he is outraged as to what's happening to our country.

His book just arrived, self-published, and you can buy it now. The book's focal point is the event that almost took our country down on September 11, 2001. But his embellishments and descriptions of what's been happening to America during the past dozen years or so, is an eye-opener. I don't know how he was able to squeeze so much information into a relatively small book. He uses an economy of words, says exactly what he thinks -- UOJ style!

I read a lot of books, too many that are a waste of my time. Some bestsellers keep me scratching my head, asking myself -- who can read this stupidity?

Al and I go back a long way. We discuss and debate many things. At times, we agree to disagree, and save it for another day. Even when he's "absolutely wrong", his opinions and intellect gives me reason to doubt, for a fleeting moment, whether I'm really the smartest guy I know. (UOJ sense of humor)

Enough already, he'll be angry at all the praise, especially from a man like me, who thinks almost everyone I meet is an idiot! (UOJ sense of humor)

You need to all read this book, hear his arguments, grasp his tremendously insightful concepts! You owe it to yourselves to read controversial, educated opinions. The book is written beautifully, you'll be glad you made this small purchase.

The book retails at amazon.com for $19.95 plus shipping, handling and packaging, but going to libertywept.org and putting in the promo code {XYK09UOJ}, you're able to purchase it for only $15.95 for a very limited time - free shipping and handling in the U.S.A. (plus tax in California only).

Most important, Al and his dear wife Barbara, created a non-profit organization called F.A.C.T., all proceeds from this book will go to this entity, to be used in an ongoing effort to investigate all suspect acts that are disguised as truths, by the U.S. government. Your purchase is tax-deductible. Now go order his book on-line at:libertywept.org

A group of fifty parents from ten schools in New York sent this letter to eight Senators.

Pastor Martin Niemoller, wrote the famous poem, First They Came. He described the apathy people had towards the plight of those afflicted during the Second World War. The point was to teach a stark lesson, if you sit idly by while your neighbor suffers, you will be left to fend for yourself with no one to protest when you are suffering.

For too long our children in Orthodox Jewish Day Schools have been victims of the insidious crime of sexual molestation. Those individuals and families who protested the abominable behaviors were blacklisted, threatened, and ridiculed. All attempts at working things through internal measures failed. The rabbis forbade any legal involvement to protect our children. Our children are on drugs and committing suicide as a result of the violations made against them.

We cannot remain apathetic to the plight of our children. The Markey/Duane bill opening a window through which the victims can achieve a small amount of justice, is the least we can do for our children. Orthodox Jewish schools which supervised their staff, took an interest in each student’s safety, and made school a place of security have nothing to lose. Those schools that willfully neglected their fiduciary trust of providing a safe and nurturing environment, don’t deserve the title Orthodox Jewish Day School and must be closed down.

Society is judged by its weakest link. Orthodox Jewry’s weakest link is the protection of our youth. We need your help passing laws to keep our children safe. Most of Orthodox Jewry (besides for Agudath Israel) fully supports this valuable piece of legislation.