The Vatican said "The ad was damaging to not only to dignity of the pope and the Catholic Church but also to the feelings of believers.”

What about the lives and dignity of the untold thousands of kids you destroyed? 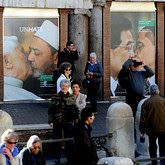 The Vatican is promising legal action to stop the distribution of a photo of Pope Benedict kissing an imam on the mouth. The photo is fake, by the way, and is part of a shock-factor advertising campaign by Italian fashion company Benetton that features world leaders getting fresh.

The new campaign, as well as the UNHATE Foundation, a new Benetton think tank aimed at, um, communicating love, are part of the company’s social responsibility strategy. Click here for the foundation website and here for slideshow of the ads. WSJ’s Heard on the Runway has more here, and the Journal has a story on the ad campaign here.

The Vatican, however, isn’t feeling the unhate. It said in a statement Thursday its lawyers in Italy and around the world had been instructed to “take the proper legal measures” to stop the use of the photo, even in the media, Reuters reported. And Here‘s a link to the statement in Italian, for what it’s worth. (Prego.)

The statement said the ad was “damaging to not only to dignity of the pope and the Catholic Church but also to the feelings of believers.” It wasn’t clear whether the Vatican intended to sue Benetton directly.

Benetton had said on Wednesday night it was withdrawing the advertisement. But apparently not quickly enough.