"Don't Judge Judaism By The Jews!"

THE MASSES ARE ASSES! 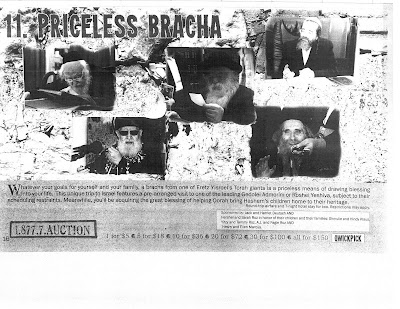 Which street-corner, soapbox preacher did you hear this ignorant blather from? Berel Wein, Yissocher Frand, Noah Weinberg, Mattisyahu Salomon, Paysach Krohn? Did they stand there playing the accordion with a monkey and a tin cup - when they told you this garbage? Did you ever hear it from an honest Jew - who does not make a living off this nonsense? A person with integrity and depth? A person who truly understands - that is exactly how you are suppose to judge Judaism?

How else do you judge anything - if not by what the results are! It either works - or it does not! And if it does not - you need to fix it by throwing out the idiots that are responsible for the deranged state of Orthodox Judaism --- calling themselves Jewish leaders!

ORTHODOX JUDAISM IS BROKEN! DOES ANYBODY HEAR ME? YOU CAN'T HAVE CHILD RAPISTS AND ALL THEIR RABBI ENABLERS --- GETTING A FREE PASS TO RAPE OUR KIDS, PHYSICALLY, SPIRITUALLY AND EMOTIONALLY, AND SCAR THEM FOR LIFE ---- FROM THE RABBIS - WHO PROTECT THEM AND COVER FOR THEM - AND CLAIM JUDAISM --- AS PRACTICED TODAY - IS THE REAL McCOY!

The "virus" of fraud, deceit and outlandish corruption that has so infected the world at large, has crept in -- and malignantly spread to every facet of the Jewish world . It is a virus that can't be cured by traditional doses of tefillah, tehillim, tzeddaka or learning more Torah.

Torah Temimah --- the "school" (not a yeshiva) that permitted and sanctioned Kolko's behavior, has began a fund-raising campaign --- claiming their broke! Any idiot that gives a dime to these menuvalim should be ridiculed publicly! Any parent that sends their child back to this concentration camp called Torah Temimah, where child-rape is no big deal, should be stoned! It's time for the community to shout out in no uncertain terms - WE'VE HAD IT - THIS SCHOOL CAN NOT BE PERMITTED TO REMAIN OPEN!

Welcome home to all the idiots from the hotels - rabbis - shysters in residence - free-loaders - included,--- who probably ate their way to illness! Welcome back to the real world - where you must deal with the ugliness that you stare in the face! Is this the Yiddishkeit you want to pass along to the next generations? We're now auctioning off brachas from the chevrah Alzheimers? Is that believable how low we've sunk?

For three years now I've been "screaming" at the top of my lungs --- we're sick --- we're in serious trouble! --- WHAT HAVE YOU DONE TO MAKE A DIFFERENCE? Ate some sushi in Arizona? Did you book next year already? Z'man Cheiruteinu??? We've never been more enslaved to our desires and indifference since "Chet Ha'Egel Hazahav! Who are we? ----- What do we stand for?----- What meaning do our lives have? When children and morality are sacrificed in the name of daat Torah -- IT'S THE END OF CIVILIZATION!

How else are we to judge Judaism --- by the Catholics? Of course - you judge Judaism by the Jews, their actions and their "leaders" --- and it's rotten to the core, at it's core....and you put on ten pounds over Pesach eating yourselves sick! Pathetic!