BREAKING NEWS-KOLKO INDICTED ON ALL FELONY COUNTS!-HOW MANY OF YOU IN THESE PHOTOS WERE HURT BY THIS MONSTER? 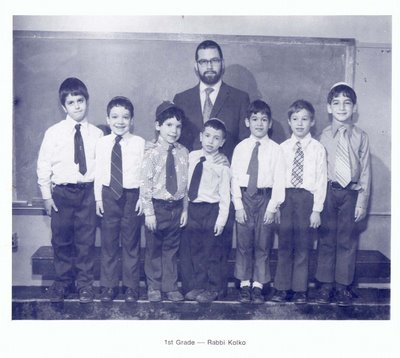 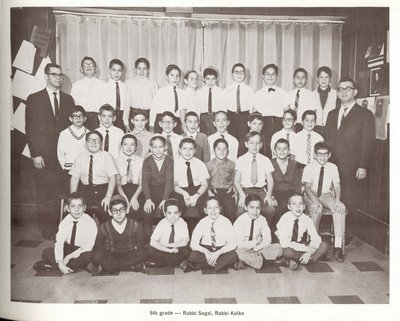 I stumbled on your blog a couple of weeks ago.
As I am out of the Brooklyn scene I was stunned at
the news of the Torah Temimah scandal.
As a former student I went through my old stuff
and came up with these two pictures from
dinner Journals from '70 and '73.

While your cause is just, the righteous guys
like you can never win. I’ve been there, all
the rabbis aren't worth the oxygen they breathe.
There are of course exceptions.

Can you believe that they let this f**k around first graders?
At least in 1970 he was co-rabbi and they were fifth graders.

I was a student at Torah Vodaath in Williamsburg.

There was a child molester rabbi there as well,
– Rabbi Langer -
all the kids knew it and warned each other,
stay away from Pee Wee. His gimmick was “Jr. Rabbi.
” You got to sit next to him for a week.

He would try and stick his hands down the back of your pants.
He also had this shtick if it was raining
and your pants were wet above the knee you
had to remove them and leave them on the radiator…

Also, “special time” at his house for special students.
By the way he was married…luckily no children.

My point is, kids protected kids,
you couldn't tell your parents,
they didn't know what you were talking about
and who'd believe you?

That's the problem here, the kids didn't warn each other.
Also why waste your time telling the menahel.
Freekin Margo was as corrupt as they came.
How else do you build a Yeshiva?
The... twins in my time were the worst students,
they got honors, why? PHG Papa had gelt.
Margo used to confiscate baseball cards and give them to his son.

I won't get into what the powers that be at YTV
Williamsburg and the Mesivta were all about.

The Mesivta dorm was a hotbed of gay f*****g.
All the South American boys.
I forget the name of the rabbi in charge
of the dorm but he sucked a few co**s in his time.

Want to know any more?
There's an old joke about a guy
going bear hunting. A bear comes up to him
and knocks his gun away and f***s him in the ass.
After the third time the bear say's to the guy,
“Tell me the truth, you're not here for the hunting are you?”

You may do with these as you wish.

UOJ TO FILE A CLASS ACTION LAWSUIT AND DIN TORAH ON BEHALF OF KLAL YISROEL!

I am seriously contemplating filing both a lawsuit and convening a bais din with the intent of exposing the corruption in our organizations and yeshivas for the entire world to see. Let's take a real close-up look at the "leaders" and the Establishment.

All organizations, yeshivas, laymen and rabbis that are involved in the corruption of our religion will be named as defendants. I intend to depose every single rabbi, layperson and other, that has been involved in stealing our money, the Government's money, and hijacking our religion.

I am asking all Jews of good will to contact me at: a_unorthodoxjew@yahoo.com - if you are willing to assist me in this effort. You can be named as a plaintiff if you wish or you can work behind the scenes remaining anonymous.

Calling all rabbis, attorneys, accountants/auditors, parents, law enforcement officials, and all Jews who had enough of the sickening corruption that has infected our community.

Get involved or authentic Torah true Judaism will be no more!
Posted by Paul Mendlowitz at Monday, December 18, 2006

Rabbi Nussbaum appears to have made some transaction involving the property he owns (along with his wife and one other) at 1854 47th st, Brooklyn. NY 11204 on 6/21/06. The documents can be found on acris, the new york city register's web site. Because I'm not a lawyer, the transaction doesn't really make sense to me. I wonder if he is protecting assets because of the possible lawsuits.

The timing seems right. Maybe the NYC Marshall or Sheriff could seize his ruler or that brown 1970's Buick with the matching pinstriped suit.

My recollection is that his fondling usually occurred
in front of the whole class when you were called up to read.

That was his usual method of operation. I remember
devising ways with a few fellow classmates on how to
avoid his wandering hand in our pants when were called up.

We would be tightening our belt, bring up our own
chumash so we could stand at arms length..,etc.

He also used to put his arm around your leg to make sure you couldn't get away.

I spoke with a former classmate, who as I write,
is searching for the diary he kept for that year and other years at YOB.

Keep up the good work and whatever methods are
required to get these people away from children.