Obama made sure his editors CROSSED OUT the word ISRAEL

HIS PERFORMANCE IN JERUSALEM...

..WAS NOT IN ISRAEL!
On Friday September 30, 2016, President Obama and his team made sure he delivered a very smooth, very moving eulogy for his "friend," Shimon Peres on Mount Herzl, in Jerusalem, Israel...I mean Jerusalem, NO COUNTRY. This was a world stage and Allah knows, Obama loves the smell of the crowd and the roar of the grease paint.Undoubtedly, in between throws of sorrow, Obama et. al., saw a political moment where they could WOW a bunch of non-thinking Jews, send a geopolitical signal to Abu Mazen and the United Nations and pave the way for Hillary Clinton to continue of the Obama "Jew-Hate" Policy of Middle East chaos. So, as he mesmerized the "distinguished audience" and exercised the proper funeral body-language,
Obama made sure his editors CROSSED OUT the word ISRAEL

from the printed text of his speech, while leaving the word there, for all the Jew-Haters of the world to enjoy.In no way would Barack dishonor his good friend Shimon by presuming, on the day of Shimon's burial,that the 4000 year-old city of Jerusalem is actually in the Land of Israel.

President Barack Obama traveled to the memorial service for former prime minister and Israeli founding father Shimon Peres Friday. The service was held at Mount Herzl in Jerusalem, the site of the national cemetery of Israel. The White House press office released to the public Obama's remarks at 7:49 a.m. ET, noting the location of the speech:

But several hours later, at 4:37 p.m. ET on Friday, the White House issued what it called a "correction" to the press release. The heading of the press release was "corrected" to strike through the name of the country, Israel:

The location of Mount Herzl is undoubtedly in Israeli territory, on Jerusalem's western side and in a part of the city that is not disputed as Israeli. As the national cemetery, Mount Herzl is the resting place for many of Israel's war heroes and national figures, and is named after Theodor Herzl, the intellectual godfather of the modern state of Israel.

A request for comment from the presidential campaign of Hillary Clinton, whose husband, former president Bill Clinton, also attended Peres's memorial service, has not yet been returned. 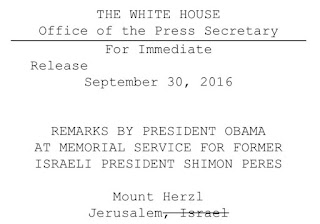 Obama's burst of enthusiasm for Shimon Peres, on the death of the Israeli left-wing political figure, had nothing to do with any personal affection. It was a cynically calculated political move. From the flags flown at half-staff to the delegation (an honor he failed to extent to Thatcher) to the overdone speech that clearly a whole bunch of Jewish staffers and associates had labored over, this was about politics.

It wasn't about Peres. It was about an opportunity to stick his thumb in Netanyahu's eye.
Obama's speech was not only a vigorous defense of the failed negotiations and concessions to the PLO. A disastrous program often associated with Peres. It was a series of cynical attacks on Peres' "critics to the right". It doesn't take much knowledge to attach one name to that nameless bunch.

Peres lost his last election to Netanyahu. He had gambled on using the elections to gain a mandate for his unpopular peace process with the PLO. Instead the Israeli people picked Netanyahu.

This enraged the Clintons who managed to use every dirty trick to force Netanyahu out of office by interfering in Israeli politics. Obama has tried and failed to do the same thing. This spectacle is not about honoring Peres. It's about exploiting his death to attack Netanyahu while pushing the same old policies of terrorist appeasement that the Israeli people have rejected again and again.