"But now many of the big suns in our world today lack conviction, while the distant factions at the margins of society are full of passionate intensity. Now the gravitational pull is coming from the edges, in sphere after sphere. Each central establishment, weakened by its own hollowness of meaning, is being ripped apart by the gravitational pull from the fringes...."

Enter the Age of the Outsiders 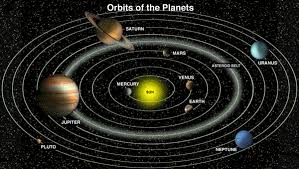 As every schoolchild knows, the gravitational pull of the sun helps hold the planets in their orbits. Gravity from the center lends coherence to the whole solar system.

I mention this because that’s how our political and social systems used to work, but no longer do. In each sphere of life there used to be a few big suns radiating conviction and meaning. The other bodies in orbit were defined by their resistance or attraction to that pull.

But now many of the big suns in our world today lack conviction, while the distant factions at the margins of society are full of passionate intensity. Now the gravitational pull is coming from the edges, in sphere after sphere. Each central establishment, weakened by its own hollowness of meaning, is being ripped apart by the gravitational pull from the fringes.

The same phenomenon can be seen in many areas, but it’s easiest to illustrate in the sphere of politics (religion), both global and domestic.

In the 1990s, the central political institutions radiated confidence, derived from an assumed vision of the post-Cold War world. History would be a slow march toward democratic capitalism. Nations would be bound in peaceful associations like the European Union. The United States would oversee a basic international order.

This vision was materialistic and individualistic. Nations should pursue economic growth and a decent distribution of wealth. If you give individuals access to education and opportunity, they will pursue affluence and personal happiness. They will grow more temperate and “reasonable.”

Since 2000, this vision of the post-Cold War world has received blow after blow. Some of these blows were self-inflicted. Democracy, especially in the United States, has grown dysfunctional.

Mass stupidity and greed led to a financial collapse and deprived capitalism of its moral swagger.

But the deeper problem was spiritual. Many people around the world rejected democratic capitalism’s vision of a secular life built around materialism and individual happiness. They sought more intense forms of meaning. Some of them sought meaning in the fanaticisms of sect, tribe, nation, or some stronger and more brutal ideology. In case after case, “reasonableness” has been trampled by behavior and creed that is stronger, darker and less temperate.

A group of well-educated men blew up the World Trade Center. Fanatics flock to the Middle East to behead strangers and apostates. China’s growing affluence hasn’t led to sweetening, but in many areas to nationalistic belligerence. Iran is still committed to its radical eschatology. Russia is led by a cold-eyed thug with a semi-theological vision of his nation’s destiny. He seeks every chance to undermine the world order.

The establishments of the West have not responded to these challenges by doubling down on their vision, by countering fanaticism with gusto. On the contrary, they’ve lost faith in their own capacities of understanding and action. Sensing a loss of confidence in the center, strong-willed people on the edges step forward to take control.

This happens in loud ways in the domestic sphere. The uncertain Republican establishment cannot govern its own marginal members, while those on the edge burn with conviction. Jeb Bush looks wan but Donald Trump radiates confidence.


The Democratic establishment no longer determines party positions; it is pulled along by formerly marginal players like Bernie Sanders.

But the big loss of central confidence is in global governance. The United States is no longer willing to occupy the commanding heights and oversee global order. In region after region, those who are weak in strength but strong in conviction are able to have their way. Vladimir Putin in Crimea, Ukraine and the Middle East. Bashar al-Assad crosses red lines in Syria. The Islamic State spreads in Syria and Iraq. Iranian proxy armies roam the region.

Republicans blame Obama for hesitant and halting policies, but it’s not clear the foreign policy and defense apparatus believes anymore in its own abilities to establish order, or that the American public has any confidence in U.S. effectiveness as a global actor.

Where is this all heading? Maybe those on the fringes of politics really will take over. Say hello to President Ted Cruz. Writing in The American Interest, Joshua Mitchell of Georgetown argues that we are heading toward an “Age of Exhaustion.” Losing confidence in the post-Cold War vision, people will be content to play with their private gadgets and will lose interest in greater striving.

I only have space to add here that the primary problem is mental and spiritual. Some leader has to be able to digest the lessons of the last 15 years and offer a revised charismatic and persuasive sense of America’s historic mission. This mission, both nationalist and universal, would be less individualistic than the gospel of the 1990s, and more realistic about depravity and the way barbarism can spread. It would offer a goal more profound than material comfort.