What other country does this? What other country stops the presses to announce -- Hello World, We’re Building More Homes. But over the years some of us have noticed Israel’s habit of going public each time it hires an architect?

Build, but shut up about it, says Trump 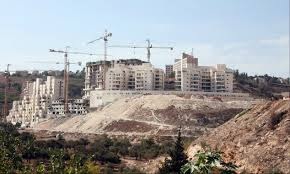 What other country stops the presses to announce that it is building more homes?

Already a rift? No. Not exactly. But Israel needs to get some gambling smarts.

Israel’s leaders sometimes take their cue from the lovable fools of Chelm. No surprises. They tell the enemy every move ahead of time.

Trump is Trump and he already knows what he’ll do but keeps his cards folded. That’s the art of his deal.

For Trump the winning move is the element of surprise.

Israel’s leaders sometimes take their cue from the lovable fools of Chelm. No surprises. They tell the enemy every move ahead of time which is bad poker and bad politics, so wrong that it’s got Trump and his team rattled and irked. Now we hear that Trump is unhappy about more homes being built within “the settlements.”

Earlier the settlements were okay. Why the mixed signals?

Most likely, Trump is bothered that Israel keeps announcing each and every plan weeks in advance, which allows the entire world to gear up in protest.

Rather, Trump says, shut up and build. That sounds more like Trump who is asking Israel to play smart and to move only when the table is in your favor.

“Not helpful in promoting peace,” said his White House spokesman today – and where have we heard that before?

Never from Trump. So something’s gone wrong and I don’t think it’s entirely Trump’s fault, nor do I think here we go again. He’s Obama all over again.

That won’t happen. But over the years some of us have noticed Israel’s habit of going public each time it hires an architect. As for me, it’s been an astonishment how Israel telegraphs every move, particularly when it comes to housing in Judea and Samaria. Who asked?

Got a problem with that? – and in unison the world says yes.

That IS the wisdom of Chelm if you expect any other outcome, and that has to be the cause of Trump’s annoyance. Immediately Israel’s High Court gets into the act along with the “peace groups” and Haaretz and The New York Times and a day later France invites 70 countries for a Paris summit to denounce the Jewish State.

That leaves Trump boxed in and he says so himself, that it cramps his style and his space to maneuver.

How many times a day can he take on the entire world, as he’s been doing, and now must carry Israel on his back – as he has it figured.

All for no good reason except that Israeli leaders do not know when to keep quiet. Instead they keep rubbing it in and keep asking for trouble.

The trouble comes when they speak loudly and then expect the United States to carry the big stick…like stopping the UN from another 2334.

Have we forgotten that personally Trump owes us nothing? The overwhelming majority of American Jews voted against him. He knows this.

The same majority protests his partial travel restrictions, which means that while he wants to keep anti-Semites out, we want them in.

Even pockets of Israelis were shown on television protesting Trump’s immigration pause. That hurt and it sure wasn’t “helpful” in terms of friendship.

Now we hear that Trump favors a two-state solution and where did he get that if not from Benjamin Netanyahu who keeps promoting that dangerous nonsense.

We can’t ask Trump to be more Jewish than the Jews or more Israeli than the Israelis.

Our only claim on Trump is that we are family. The United States and Israel share the same values.
Only Israel can be counted on through thick or thin throughout the region and he needs Israel as much as Israel needs him.

Trump knows this. But he’s asking Israel to play by new rules, which is to shut up and deal only when the time is right.

New York-based bestselling American novelist Jack Engelhard writes a regular column for Arutz Sheva. New from the novelist: “News Anchor Sweetheart,” a novelist’s version of Fox News and Megyn Kelly. Engelhard is the author of the international bestseller “Indecent Proposal.” For books like his award-winning memoir “Escape from Mount Moriah,” he is the recipient of the Ben Hecht Award for Literary Excellence. Website: www.jackengelhard.com

http://www.israelnationalnews.com/Articles/Article.aspx/20129
Posted by Paul Mendlowitz at Tuesday, February 07, 2017 No comments: