Finally! ---- The latest draft obtained by the Daily News would raise the top age that a child sex abuse survivor can bring a civil lawsuit to 55, up from the current 23.

ALBANY – State lawmakers will soon introduce a revised, tougher bill designed to make it easier for victims of child victims abuse to seek justice as adults, the Daily News has learned.

The latest draft obtained by the Daily News would raise the top age that a child sex abuse survivor can bring a civil lawsuit to 55, up from the current 23.

Gov. Cuomo last week and a previous version of the bill in the Legislature had sought to raise the age to 50.


A criminal case involving child sex abuse would be able to be brought until the survivor’s 28th birthday if it’s a felony and 25th if it’s a misdemeanor, which matches the governor’s legislation and previous legislative bills that passed the Democrat-controlled Assembly but died in the Senate that until January was run by the Republicans.

But with research showing that many survivors don’t begin dealing with what happened to them until later in life, lawmakers ultimately decided giving them even more time to bring a civil lawsuit would be appropriate, Senate bill sponsor Brad Hoylman (D-Manhattan) explained.


A criminal case involving child sex abuse would be able to be brought until the survivor’s 28th birthday if it’s a felony and 25th if it’s a misdemeanor, which matches the governor’s legislation and previous legislative bills that passed the Democrat-controlled Assembly but died in the Senate that until January was run by the Republicans.Going forward, the bill also does away with a requirement that a minor abused at a public institution like a school must file within 90 days of the attack of an intent to sue. Under the latest draft, someone sexually assaulted at a public institution would be able to bring a civil lawsuit up to his or her 55th birthday. The draft also includes a one-year lookback window to revive old cases that under current law cannot be filed.
The latest draft includes language designed to ensure that window will be open to those abused at both private and public institutions.

Timothy Cardinal Dolan had groused that the Child Victims Act language introduced in the governor’s budget proposal last week was vague as to whether it would treat public and private institutions the same.

Though Cuomo and the legislative bill sponsors had denied that was the case, the Legislature’s emerging legislation would specify that those abused at a school or other public institution could revive an old case even if they had failed to file a 90-day notice of claim.

After more than a decade-and-a-half of intense lobbying—and the Democrats now controlling both houses of the Legislature--survivors and advocates could see a vote on the Child Victims Act within a week or two, insiders say.

“It is a watershed moment for adult survivors of child sex abuse,” Hoylman said. “It’s been a long slog.”

Assembly sponsor Linda Rosenthal (D-Manhattan) added that “I think everybody will be pleased because we will be providing a path to justice in court and with a look-back window to revive old cases.” 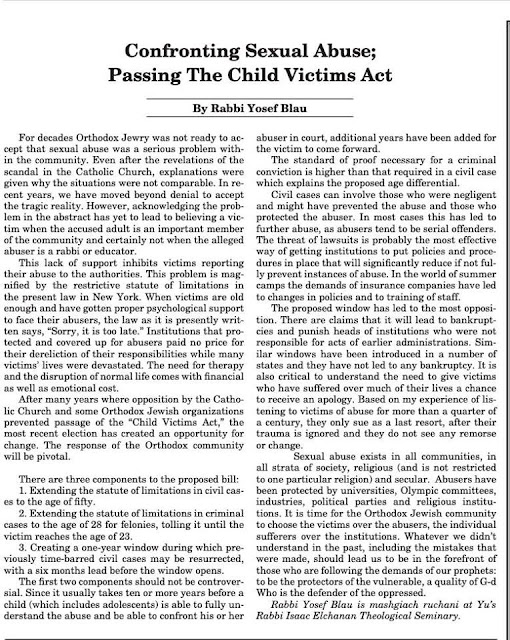